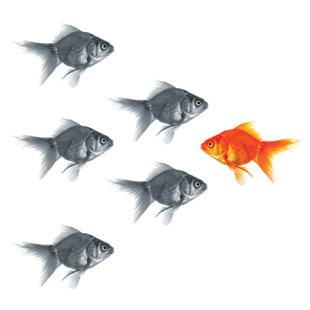 © GUNNAR3000/ISTOCKPHOTO.COMDo difficult research—it’s where the true answers lie. When doing research, don’t look where everyone else is. You’ll just confirm their findings. Look along the untrodden path going the wrong way—that’s where the unimaginable, disruptive, game-changing discoveries are.

—Neurosurgeon and former NASA researcher Mark Wilson, speaking about the future of emergency medicine on the Imagine the Future of Medicine blog (March 28)

Mavericks once played an essential role in research. Indeed, their work defined the 20th century. We must relearn how to support them, and provide new options for an unforeseeable future, both social and economic.

—From a letter to The Guardian titled “We need more scientific mavericks,” signed by 30 scientists, including three Nobel laureates (March 18)

It’s like a toilet bowl that swirls but doesn’t flush.

—Charles Moore, environmental advocate credited with bringing attention to an...

I am not methodical enough, I guess. In some cases, you look at my notebooks, there’s no way you can tell whether this is from talking to somebody or whether it was something I read on the Internet.

—Primatologist and author Jane Goodall, speaking with the online science publication Mosaic about the year-old allegations that she plagiarized several websites, including Wikipedia, in her latest book, Seeds of Hope (April 1)

We live in an era of man-made climate change. In many cases, we are not prepared for the climate-related risks that we already face. Investments in better preparation can pay dividends both for the present and for the future.

—Vicente Barros, cochair of the Intergovernmental Panel on Climate Change working group that released the latest UN-sanctioned assessment of global climate change, in a press release accompanying the report (March 31)

Health and safety . . . [have] become like a fake religion and it’s having a significant impact on education. It is like putting a wall around the top of a mountain in case somebody falls off. Well, why would anyone ever climb it? Too many students are told as long as they know which box to tick that’s all that matters. They are not being inspired in the same way that I was.

—James Lovelock,  the researcher who was the first to detect persistent CFCs in the atmosphere, speaking to The Telegraph about how overreaching concerns about health and safety are keeping kids from being inspired by science (April 8)