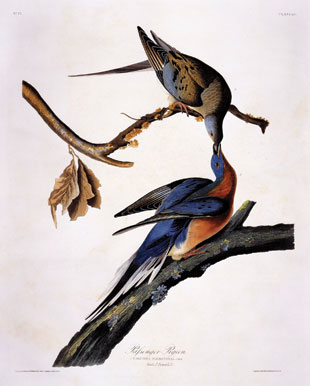 REVIVAL? Bringing back extinct species such as the passenger pigeon may be within science’s grasp. But would the public value such a move?TORONTO PUBLIC LIBRARY/WIKIMEDIA COMMONS

Do you think that wealthy people on the East Coast are going to want billions of passenger pigeons flying over their freshly manicured lawns and just-waxed S.U.V.s?

I strongly believe that the only way to encourage innovation is to give it to the young. The young have a great advantage in that they are ignorant. Because I think ignorance in science is very important. If you’re like me and you know too much you can’t try new things. I always work in fields of which I’m totally ignorant.

The genetic you and the neural you aren’t alternatives to the conscious you. They are its foundations.

—Paul Bloom, Yale University psychologist and cognitive scientist, in an article arguing that humans are more than the sums of their biochemical parts (The Atlantic, February 19)

Americans whisper the word “Alzheimer’s” because their government whispers the word “Alzheimer’s.” And although a whisper is better than the silence that the Alzheimer’s community has been facing for decades, it’s still not enough. It needs to be yelled and screamed to the point that it finally gets the attention and the funding that it deserves and needs.

—Actor and writer Seth Rogen, testifying before Congress on the need to devote funds to the study of Alzheimer’s disease (February 26)

Translating new knowledge from basic science into practical applications is an expensive, high-risk, and often decades-long process that does not fit the business plans of either commercial or philanthropic groups.

—The Federation of American Societies for Experimental Biology, in a statement on the 2015 US federal budget (February 27)

Giving “equal time” to creationism and evolution is like giving equal time to astrology and astronomy or, for the aspirant cooks in the audience, Hannibal Lecter and Julia Child.

—Howard Doughty, in a comment posted in response to an opinion piece on www.the-scientist.com expressing the view that scientists should refrain from debating creationists (February 7)