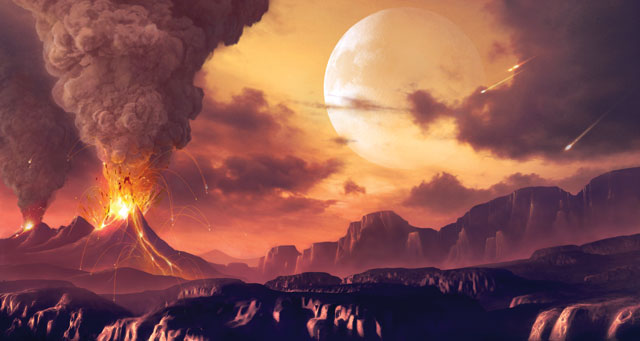 LIFE’S CRADLE: About 4 billion years ago, in the so-called period of heavy bombardment, Earth was continually subjected to gigantic impacts by chunks of debris left over from the formation of the Solar System. © MARK GARLICK/SCIENCE SOURCE

It is quite certain that there was a moment when life did not exist on our planet, and another moment when it appeared. It is the passage between these two states that forms the great problem of natural philosophy today.

What is important in the origin-of-life field is understanding the transitions that led from chemistry to biology. So far, I have not seen that efforts to define life have contributed at all to that understanding.

—Nobel laureate Jack Szostak, of Harvard Medical School and Massachusetts General Hospital, on the distinction between origin-of-life studies and the categorization...

How worried are you, if at all, that scientific research into human or animal DNA might lead to scientists “playing god” with things that should remain outside the realm of science?

—A Huffington Post/YouGov poll question to which 72% of respondents answered that they were either “very worried” or “somewhat worried” about the possibility (February 2, 2014)

—Creationist Ken Ham, in his opening remarks at the start of a debate with science communicator Bill Nye on whether or not creationism is a viable model for life’s origins (February 4, 2014)

—Bill Nye, science communicator, in his opening remarks at the start of a debate with creationist Ken Ham (February 4, 2014)