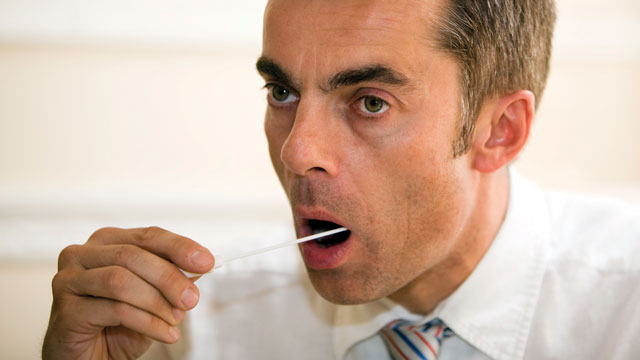 HOLD THAT SWAB: The FDA is taking issue with the lack of scientific evidence presented by 23andMe to support the conclusions it draws from its personal genomics test kits.© WILLSIE/ISTOCKPHOTO.COM

FDA is concerned about the public health consequences of inaccurate results from the [Personal Genome Service] device; the main purpose of compliance with FDA’s regulatory requirements is to ensure that
the tests work.

—Alberto Gutierrez, director of the FDA’s Office of In Vitro Diagnostics and Radiological Health, in a letter to 23andMe CEO Ann Wojcicki, telling her that the company must stop marketing its genomic testing kits or face FDA sanctions (November 22)

While the FDA’s paternalistic policy on [direct-to-consumer] genomics is admirable, it is also obsolete. The agency’s dictum, at its core, ignores
the medical paradigm shift towards patient empowerment that consumer genomics and the Internet is advancing each day.

Reading a biology textbook from 1983 is like reading a modern history text written before the Second World War.

—Science writer and New York University research psychologist Gary Marcus, in a New Yorker blog post on why science has its critics (November 7)

Our past successes in agriculture have lulled many of those in decision-making positions into a false sense of security. It’s been so long since any of them were actually hungry.

—L. Val Giddings, senior fellow at the Information Technology and Innovation Foundation, on the need to prepare agriculture for changes wrought by climate change (as quoted in The New York Times, November 11)

We have a more complicated understanding of football than we do genetics and evolution. Nobody thinks just the quarterback wins the game.

—Duke University biologist Gregory Wray, as quoted in an article about why the metaphor of the selfish gene is wrong by David Dobbs in Aeon (December 3)

These characteristics of the PNAS study are very common in neuroscientific investigations of male/female sex differences, and represent two important ways in which scientific research can be subtly “neurosexist,” reinforcing and legitimating gender stereotypes in ways that are not scientifically justified. And, when researchers are “blinded” by sex, they can overlook potentially informative research strategies.

—University of Melbourne psychologist Cordelia Fine, in a blog post refuting the recent findings that suggest the existence of wiring differences between male and female brains (December 4)