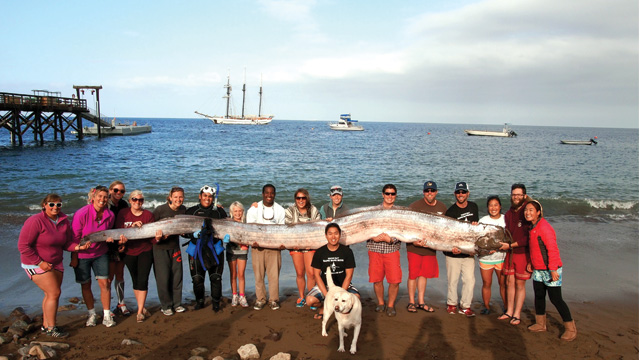 SEA MONSTER: Giant oarfish (Regalecus glesne) rarely wash up as intact as this 18-foot male that was found in October off of Santa Catalina Island in California.CATALINA ISLAND MARINE INSTITUTE

In fact, I took a bit home to try on the grill. . . . I wouldn’t cross the street if a restaurant had a sign out for it.

I haven’t touched an Oreo since doing this experiment.

—Neuroscientist Joseph Schroeder of Connecticut College, talking to NBC News about his recent study, which found that the cookies activated more neurons in the pleasure centers within rat brains than did drugs like cocaine and morphine (October 15)

—A Nature editorial, published in the wake of sexual harassment allegations levied against Scientific American blogs editor Bora Zivkovic, who has since resigned (October 22)

Big Data is bullshit. . . . The “big” there is purely marketing. This is about you buying big expensive servers and whatnot.

—Computer programmer Harper Reed, who served as Barack Obama’s chief technology officer during his 2012 presidential campaign, in a keynote address at the start of the Critical Issues in Higher Education conference (October 29)

The effects of the shutdown are—as we predicted—slowing the national scientific enterprise. However, these delays pale in comparison to the impact that sequestration has had, and will continue to have, if Congress doesn’t resolve these budget issues.

—Jeremy Berg, president of the American Society for Biochemistry and Molecular Biology, on the state of federal science funding (October 21)

For the generation just entering our field, this must seem like scientifically the best of times and financially the worst of times. Those of us who have been in neuroscience for decades have seen tough times before.