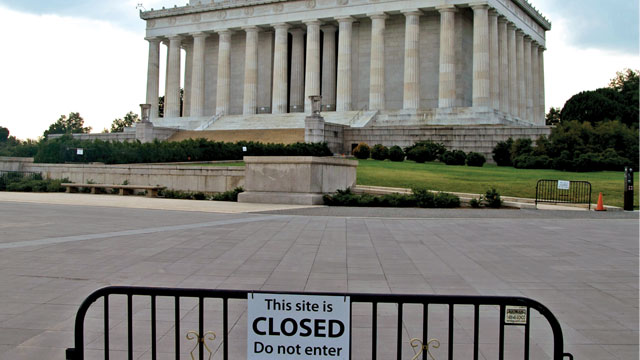 SCIENCE STALLED: The government shutdown has shuttered landmarks, such as the Lincoln Memorial, and hobbled science.REIVAX/FLICKR/WIKIMEDIA COMMONS

How many potential future Nobel Prize winners are struggling to find research support today, or have been sent home on furlough? How many of them are wondering whether they should do something else—or move to another country? It is a bitter irony for the future of our nation’s health that NIH is being hamstrung this way, just when the science is moving forward at an unprecedented pace.

—Francis Collins, director of the National Institutes of Health, on the impact of the US government shutdown (The New York Times, October 7)

If you applied this rule to scientists,
a sizable proportion of them might be in jail today.

—University of Oxford evolutionary biologist Richard Dawkins, responding to a question about whether religious fanaticism or scientific advancement would lead to mankind’s ultimate undoing (The Daily Show with Jon Stewart, September 24)

As the news arm of a 141-year-old science and technology magazine, we are as committed to fostering lively, intellectual debate as we are to spreading the word of science far and wide. The problem is when trolls and spambots overwhelm the former, diminishing our ability to do the latter. . . . Even a fractious minority wields enough power to skew a reader’s perception of a story.

Fifteen years from now, somebody is going to say it’s the 489th neuron from the back of your ear that made you do it. That’s going to be hard to dismiss.

—Joshua Sanes, Brainbow coinventor and director of Harvard’s Center for Brain Science, speaking to future law students at Fordham University about mapping the wiring of the human brain (The New York Times, September 17)