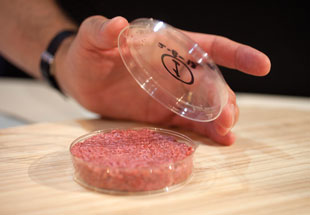 Potentially, you can do this in your kitchen. You can grow your own meat. But you have to know what you want to eat 8 weeks in advance.

—Mark Post, researcher at Maastricht University in the Netherlands, at the London press conference where he served up a sample of the world’s first lab-grown burger (August 5)

It’s easy for someone who can go down to the grocery store and buy anything they need to be against GMOs.

The ideal thing would be to take two identical Earths, heat...

—University of California, Berkeley, researcher Solomon Hsiang, commenting on his recently published study that reported a rise in violence as temperatures increase and precipitation
fluctuates more widely (The Scientist, August 1)

Since when do scientists try to get manifestos into Nature and Science? If they were going to do the human genome or go after the Higgs boson, I could understand that, but this is extraordinarily focused. They are ramming gain-of-function experiments down our throats against debate, and it’s not scientific.

—Simon Wain-Hobson, a virologist at the Pasteur Institute in France, bemoaning the publication of plans for a new round of studies to explore the ability of deadly H7N9 flu to mutate into more virulent
and transmissible forms in mammals (The Scientist, August 7)

This is an extraordinary time for the understanding of the human condition. Intellectual problems from antiquity are being illuminated by insights from the sciences of mind, brain, genes, and evolution.

— Harvard University psychologist Steven Pinker, in “Science Is Not Your Enemy” (The New Republic, August 19)

I used to think that by the time you got down to the individual neurons, you had operatives that could be “replaced by a machine.” . . .Better to hold off the idea of machine replacement until we get down to the level of, say, motor proteins. They are mindless little machines, not alive, “just” very well-designed macromolecules.

—Philosopher Daniel Dennett, on how his theory of mind has changed over time,
from a wide-ranging interview published in 3:AM Magazine (June 2013)