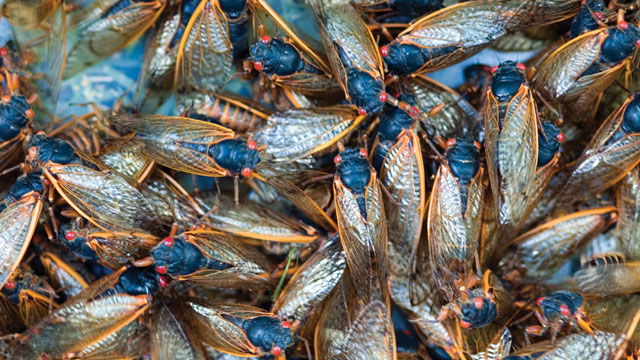 —Lyrics from Bob Dylan’s “Day of the Locusts,” penned after he heard the cacophonous sound of Brood X periodical cicadas while waiting to receive an honorary doctorate from Princeton University on June 9, 1970. Brood II cicadas are just beginning to emerge from 17 years underground.

They’re coming back in about a month,
and this time I will be ready for them,
having practiced jamming along with
other broods that came out in Illinois
2 years ago and in Virginia last spring.

—Professor of philosophy and music David Rothenberg, describing how he played a saxophone with cicadas, in a Forbes interview about his fascination with insect calls (April...

We hope to have a plant which
you can visibly see in the dark
(like glow in the dark paint) but
don’t expect to replace your light
bulbs with version 1.0.

—Tech entrepreneur Antony Evans, who heads a group that is developing and hoping to market plants that have been engineered to glow, on the team’s Kickstarter page

We are extremely concerned that the USDA
is not planning to regulate the first-ever
field release of an organism engineered
through synthetic biology technologies. . . .
We urge the USDA to put a halt to this risky,
unregulated pursuit.

—Environmental organization ETC Group, in a letter to the US Department of Agriculture, asking that the agency stop the glowing plant project from moving ahead (April 30)

The answer of modern molecular
biology to this much-debated question
is categorical: chance, and chance
alone, did it all, from primeval soup to
man, with only natural selection to sift
its effects. This affirmation now rests
on overwhelming factual evidence.

—Biochemist and cell biology pioneer Christian de Duve, who won a 1974 Nobel Prize for codiscovering the lysosome and died on May 4, in his 1984 book, A Guided Tour Of The Living Cell

—Presidential science advisor John Holdren, on a congressional proposal to inject legislators into the National Science Foundation’s grant-review process, after his speech at the annual Science and Technology Forum sponsored by the American Association for the Advancement of Science (May 2)