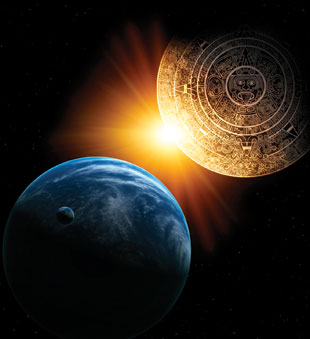 DOOMSDAY: Widespread misinterpretation of the Mesoamerican Long Count calendar led many people to believe that a cataclysm would mark the end of 2012.© NATALIA LUKIYANOVA/ISTOCKPHOTO.COM

There is nothing that is going to happen to the Earth, there’s no cosmic catastrophe coming, but it’s a little scary to think of millions of people who are storing up guns and ammo and machetes. I just hope they stay in their hole on the 21st and don’t come out and make a mess.

—NASA senior scientist David Morrison, citing a recent Reuters poll indicating that more than 25 million Americans did not expect to see Christmas last year because they believed that the world would end on December 21, 2012 (The Young Turks, December 6, 2012)

The ancient Maya predicted the world would continue, that 7,000 years from now, things would be exactly like this. We keep looking...

—Boston University archaeologist William Saturno, describing his
research team’s discovery of the oldest known Maya lunar calendar,
which contradicted the popular view that the Maya predicted
Armageddon in 2012 (iO9, May 10, 2012)

Whether the Earth was created in 7 days, or 7 actual eras, I’m not sure we’ll ever be able to answer that. It’s one of the great mysteries.

Evolution is, so to speak, an experimentalist that has been running experiments for three and a half billion years, since the origin of life on Earth. And, wonderfully, the genomes of today’s organisms retain the lab notes of these experiments, so that we can go back and reconstruct the events that took place.

—Eric Lander, genomicist and founding director of the Broad Institute of MIT and Harvard (“Genetics” in Biology, 7th edition, 2005).

—Famed science fiction author and biochemist Isaac Asimov, in his 1988 book with Jason A. Shulman, Isaac Asimov’s Book of Science and Nature Quotations

I love my research and would love to continue it, but am unsure where the direction of research funding is heading and very wary of the impact of NIH funding on my future career.