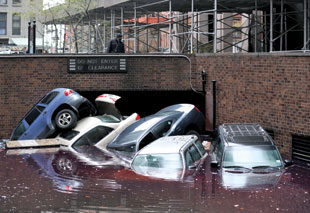 SWAMPED: Cars piled on top of each other at the entrance to a garage in Lower Manhattan the day after Hurricane Sandy hit New York City and surrounding areas© STAN HONDA/AFP/GETTY IMAGES

Our climate is changing. And while the increase in extreme weather we have experienced in New York City and around the world may or may not be the result of it, the risk that it might be—given this week’s devastation—should compel all elected leaders to take immediate action.

—New York City mayor Michael Bloomberg, in an entry posted on his website in the wake of Hurricane Sandy (Nov. 1, 2012)

The faculty were in waders, wandering through the fetid waters,
rescuing freezer specimens and animal cages.

Having an Obama administration versus a Romney administration may lead to some differences, but for the most part, I think things haven’t changed much from where they were a week ago.

—Matt Hourihan, R&D and policy program director,
American Association for the Advancement of Science, on the outlook for federal science funding following the US Presidential election (LiveScience, Nov. 8, 2012)

The first primate nouns were almost certainly those embedded in calls that meant, “Oh shit, big cat!” “Oh shit, giant eagle!” or “For the love of god, did you see the size of that snake?” In this way, predators may have had a positive impact on who we are now, having given us the precursors of language, or at the very least, cussing.

We don’t feel our interests are being best served by an anti-science fundamentalist representing us on the Science, Space and Technology Committee.