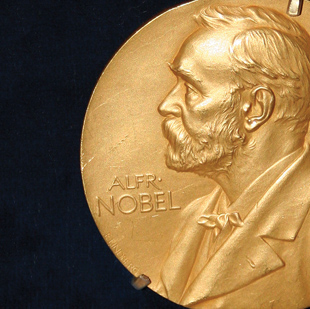 Whereas a century ago a patent clerk famously divined the theory of relativity in his spare time, discovering a Higgs boson requires decades of planning and the efforts of 6,000 researchers. No one person—no troika, even—can legitimately claim all the credit.

—The editors of Scientific American, in an essay casting the Nobel Prize as a “charming anachronism” that needs to evolve to reflect the realities of modern scientific inquiry
(Oct. 8, 2012)

It is particularly pleasing to see how purely basic research, originally aimed at testing the genetic identity of different cell types in the body, has turned out to have clear human health prospects

—Developmental biologist John Gurdon, who shared this year’s Nobel Prize for Physiology or Medicine, with University of California, San Francisco, stem cell biologist Shinya Yamanaka, for discovering that adult cells could be reprogrammed to behave like stem cells (...

Policy debate these days involves trying to rubbish the science, and that is dangerous. Global warming denialists, those who oppose genetically modified crops and vaccinations, or the teaching of evolution: their trick is [to] treat scientific argument as if it’s a political argument, and cherry-pick data.

I didn’t believe it at first, but after I spoke with about five people—they handed the phone around—with really convincing Swedish accents, I started to think it was for real.

People are faced with probably the most significant stress on the community in quite a few decades, certainly as measured by success rates for NIH grant applications, now down to 17%, and lower than that for some institutes. A great many scientists, including those just starting out, are having trouble getting their ideas supported and getting increasingly frustrated. That is what wakes me up at night.

—National Institutes of Health Director Francis Collins, on the impact of the economic downturn on the funding of US scientific research (Nature, Sept. 26, 2012)