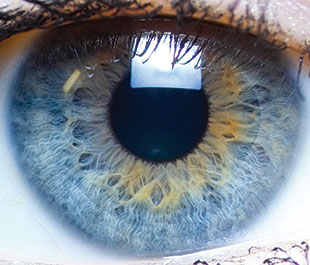 EYE SEE!: The structure, function, and evolution of the eye has provoked careful thought and wild conjecture throughout scientific history.LAITR KEIOWS/WIKIMEDIA COMMONS

The Bishop goes on to [write about] the human eye, asking rhetorically, and with the implication that there is no answer, “How could an organ so complex evolve?” This is not an argument, it is simply an affirmation of incredulity.

—University of Oxford evolutionary biologist Richard Dawkins writing about The Probability of God, the 1985 book by Bishop Hugh Montefiore, in The Blind Watchmaker: Why the Evidence of Evolution Reveals a Universe Without Design (1986)

Self-organization is so mysterious. We still can’t explain why the cells come together to make an eye. There must be more principles that we still don’t understand yet. It’s something that makes me completely in awe of life.

—The late Yoshiki Sasai of Japan’s RIKEN Center for Developmental...

A lot of people with measurable vision impairment are unaware of their affliction because their brain fills in the missing pieces.

—Vision scientist Peter Bex of Northeastern University, on the fact that one-third of the human brain is devoted to visual processing(news@Northeastern, September 4)

When we’re asked “What do the words ‘red’, ‘blue’, ‘black’, ‘white’ mean?” we can, of course, immediately point to things which have these colours—but our ability to explain the meanings of these words goes no further! For the rest, we have either no idea at all of their use, or a very rough and to some extent false one.

In short, there is nothing about my job that makes it unsuitable for a blind person. Of course, there are inherent risks in the fieldwork; I have been stung by rays, struck down by stomach cramps, and detained by police who mistook me for an operative trying to overthrow the government of their African country. All field scientists have similar experiences. The blind, no more than the sighted, must act sensibly and with appropriate caution.

—Geerat Vermeij, an evolutionary biologist at the University of California, Davis, in a speech delivered at the convention of the National Federation of the Blind in Chicago about the challenges of doing biology field work (July, 1988)

Ninety percent of the blind people on our planet are in the poorest developing countries. And eighty-five percent of that could be prevented or easily treated.

—University of Utah ophthalmologist Geoff Tabin, who has performed thousands of cataract surgeries and trained surgeons in Nepal and Africa, in a NOVA video profile