What if a COVID test was as easy as one, two, three? A team of researchers led by Jim Collins, a biomedical engineer at Harvard’s Wyss Institute for Biologically Inspired Engineering, have created a test that detects SARS-CoV-2 infection from spit in three easy steps.

The steps are simple: spit into a filter, move a tube, and push a plunger down. Within an hour, the results glow bright enough to see with the naked eye or a smartphone app. 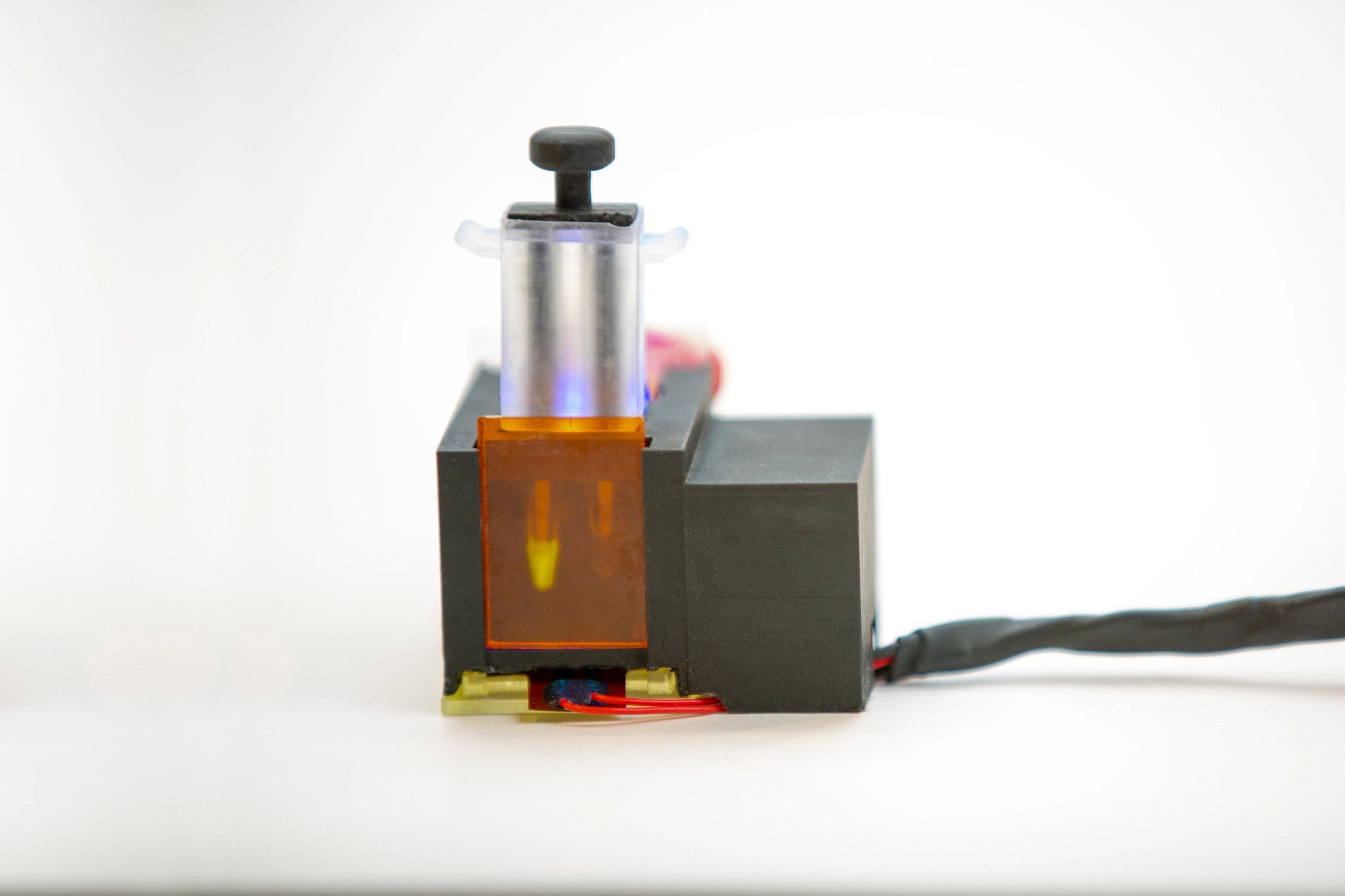 The point-of-care diagnostic platform, dubbed miSHERLOCK for “minimally instrumented specific high sensitivity enzymatic reporter unlocking,” uses CRISPR technology to cut out specific sections of the viral genome and single-stranded DNA probes that fluoresce. The low-cost technology can distinguish between variants and can be easily reconfigured to detect other viruses or variants of concern, the team reported in Science Advances.

“This is a really compelling and powerful application of the field of synthetic biology,” said Julius Lucks, a synthetic biologist at Northwestern University, who was not involved in the new research.

At the beginning of the pandemic, there was a diagnostic bottleneck in the US. Resource scarcity was a major factor; hospitals were out of tools fundamental to the hospital setting.

It was difficult to “even get swabs, very simple, basic things that you never thought you would run out of,” said Xiao Tan, a gastroenterologist at Massachusetts General Hospital, who was part of the team that built the new device. “We really wanted to create something that, aside from a person and their spit, was completely independent of needing anything else.”

More than a year into the pandemic, several tests to detect SARS-CoV-2 infection exist. Most diagnostic tests are rapid antigen tests. Although these tests can be accurate, they are subject to user error and are not as accurate as nucleic acid tests.

Nucleic acid tests, however, come with their own sets of problems. “Most of our testing requires significant laboratory equipment as well as skilled technicians,” said Rose Lee, an infectious disease specialist at Boston Children’s Hospital, who was part of the team with Tan.

Sequencing tests to diagnose COVID require multiple pipetting steps and specific lab equipment such as centrifuges, PCR machines, and other instruments that can cost thousands of dollars. Plus, the early days of the pandemic showed that although centralized laboratory testing can be very sensitive, when it comes to testing millions of samples, it doesn’t scale.

Currently, the only FDA-approved at-home nucleic acid-based test requires a prescription and comes with a hefty price tag. None currently distinguish between viral strains.

The lack of global access to a test led to a delay in tracking and responding to the spread of new variants. Some viral strains such as the Delta variant are more transmissible than others. How much immunity natural infection or immunization offers also differs between variants.

Knowing which variant is responsible for a positive SARS-CoV-2 test result may impact decision-making around public health control measures such as social restrictions.

“What we present is not a sequencing device,” said Helena de Puig, a medical engineer at the Wyss Institute and lead author of the new paper. “It is a device that is able to detect the specific mutations that are characteristic of the variants.” 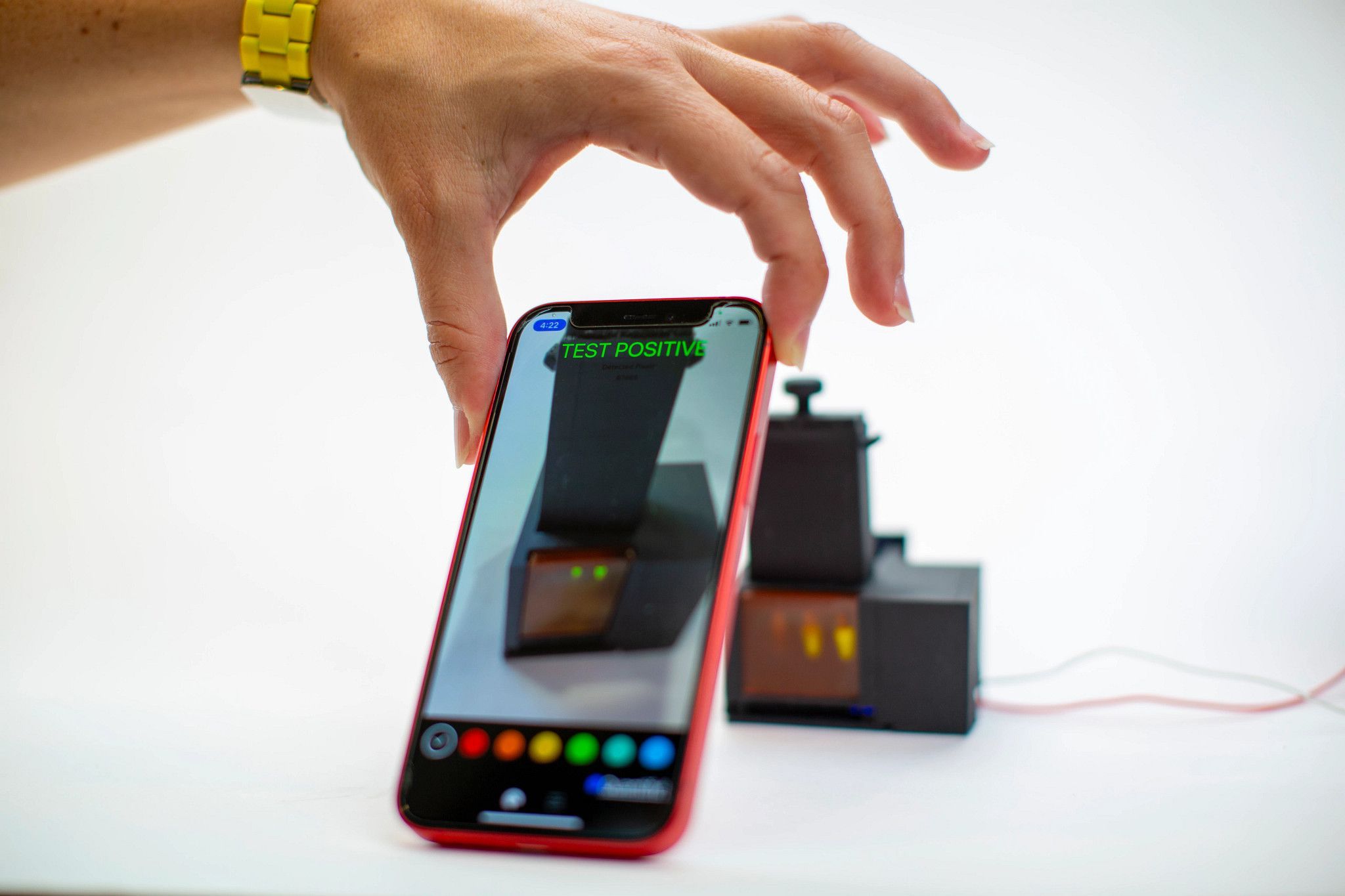 Collins’s team planned to design a device for decentralized, at-home, or resource-limited settings. They started with how to collect samples from patients. Collecting blood or urine requires equipment. Saliva seemed to be a good choice.

Saliva, however, is challenging to work with. It is a very thick substance and chock-full of materials that can interfere with detection reactions. The team brainstormed how to inactivate those components of saliva while also extracting and purifying nucleic acids from viral particles.

They landed on an elegant solution. Once a patient has spit into a funnel attached to the device, gravity and capillary action pull the viscous liquid through a filter that collects and concentrates viral RNA.

The user then moves the column and uses an attached plunger to push the filter through a sealed water pellet and into a freeze-dried reaction.

“The thing that really shines, and this is taking it to the next level, is incorporating the sample prep,” said Lucks. “Oftentimes, that can be a big hurdle.”

The device is accurate, quick, and quite small. miSHERLOCK is no bigger than two decks of cards stacked on top of each other.

“We tried to miniaturize all of the components from a lab that we would need into one small device,” said Devora Najjar, a biochemical engineer at the Massachusetts Institute of Technology and a critical member of the device-building team.

The device can be printed by an off-the-shelf three-dimensional printer with biodegradable polylactic acid, which reduces plastic waste.

The device costs 15 USD when using all commercially-obtained, off-the-shelf components. But it’s possible to reduce the cost further; reusing components may bring the cost down by more than half.

“We are an academic lab,” de Puig said. “We don’t have manufacturing capabilities for these devices.” But with a commercial partner to do the manufacturing, the cost could drop to about 3 USD all in.

Another boon of the device is that it’s highly modular and easily adaptable. “It’s a very flexible platform that… can evolve as the pandemic evolves or as different needs evolve,” Najjar said. Working with that flexibility, the team is now working on a version to detect the Delta variant.

“As an engineer or scientist, you can do all kinds of lab-on-chip devices, but it should be easy to use, and this has not been particularly successful over the year,” said Can Dincer, a microsystems engineer at the University of Freiburg, who did not participate in the research.

“This is like a small lab, a pocket lab,” Dincer said. “It’s like a factory. Put in the raw material and at the end, you have the results.”