Messenger RNA (mRNA) vaccines developed in response to the ongoing COVID-19 pandemic elicit strong immune responses and provide protection against the virus. But how vaccination-induced protection compares with immunization remains unclear, especially in regard to parental antibodies in human milk.

Now, researchers report that antibodies in human breast milk from vaccinated women were dominantly IgG, the smallest but most common type of antibody. In contrast, antibodies against COVID-19 in breast milk from women infected with SARS-CoV-2 were mostly IgA, which typically reside in the nose, respiratory tract, and other mucosal areas. Although the antibodies differed, both types neutralized the virus, suggesting that breast milk likely provides some degree of protection to infants.

Kirsi Jarvinen-Seppo, a pediatric allergist-immunologist, and Bridget Young, a human milk scientist, both at the University of Rochester School of Medicine and Dentistry, knew from previous research that the SARS-CoV-2 virus does not pass from mother to infant through breast milk. Given that breast milk harbors many protective immune factors against other viruses and pathogens, the researchers wanted to find out if there is any potential protection in breast milk, and if so, how robust that protection might be.

The researchers recruited lactating women with COVID-19 to participate in the study early on in the pandemic when lockdowns were high. On top of an active infection and a young newborn, many families also had older children who were homeschooling. 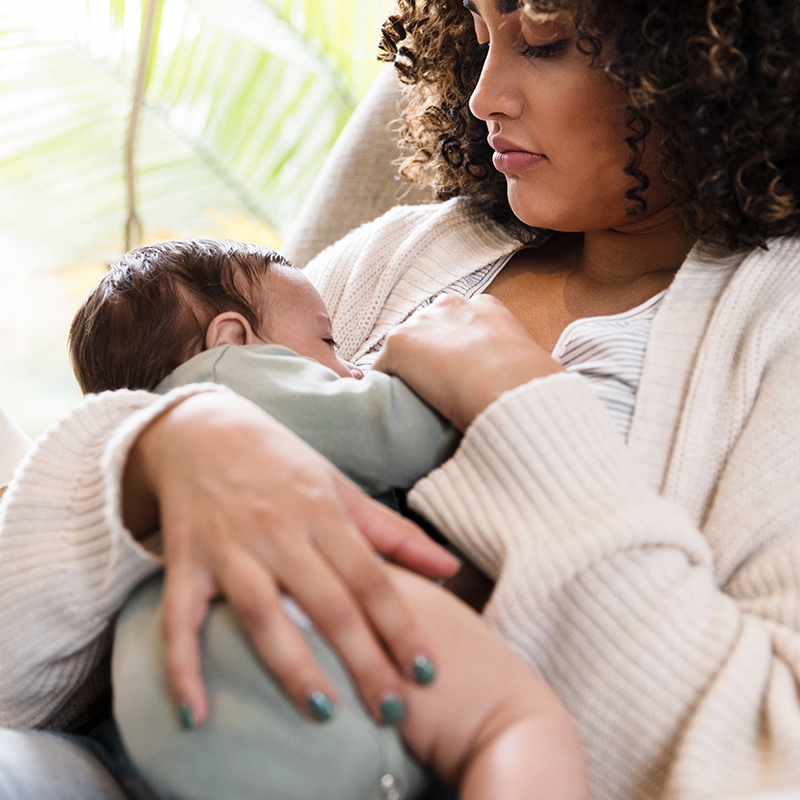 Antibodies in breastmilk from SARS-CoV-2 infection or mRNA vaccination neutralize the virus.

When vaccines became available to healthcare providers last December, Young and Jarvinen-Seppo had the opportunity to collect milk from lactating parents who received an mRNA vaccine.

The team put up recruitment flyers in hospital pumping rooms around their medical institution. Women began sharing the flyers on social media, and recruitment took off. “We were receiving over 300 inquiries a day,” Young said. “The response was so big.” Almost immediately, Young had to begin turning women away.

When the team analyzed antibodies in breast milk from the two groups, they found that mothers infected with SARS-CoV-2 produced a rapid and robust, if variable, IgA response, while vaccinated mothers produced a universal IgG response after the first shot and an even more robust response after the second dose.

“With vaccination, it’s a uniform dose; the route is exactly the same in every individual; and it very universally induces pretty much the same response,” Jarvinen-Seppo said. “But with infection, you might be infected through oral exposure or through other mucosal surfaces. The amount of viral replication and your immune response will probably differ very much between individuals.”

Young and Jarvinen-Seppo then incubated milk from the vaccinated and infected cohorts with live SARS-CoV-2 virus. They added cells to see whether the milk was able to keep the virus from infecting them. Antibodies from both groups neutralized the virus, the researchers reported in JAMA Pediatrics.

“It gives us some good idea of how the virus might be behaving when interacting with milk in the real world,” Young said.

Rebecca Powell, an infectious disease and lactation expert at the Icahn School of Medicine at Mount Sinai, who did not participate in the research, called the study a “solid analysis” but noted that globally, most people are not getting mRNA vaccines. But the work, “makes a very good case that lactating people should absolutely get vaccinated,” Powell said.

Although Young and Jarvinen-Seppo cannot say if or to what degree the antibodies in milk provide protection against the virus to infants, “it’s good news,” Young said.

“It’s definitely not going to hurt, and it’s likely providing some protection,” she said. “It’s kind of like icing on the cake. We recommend that lactating persons receive the vaccine to protect themselves against SARS-CoV-2, so this additional benefit of potentially providing protection to their infant is just extra.”