Finding a cure for HIV will require eliminating the viral reservoir: dormant HIV-infected cells that hide from the immune system and persist for years.

“The idea with the CAR stem cell approach is that we're transplanting a source of stem cells that persist for the lifetime of the individual,” said Christopher Peterson, a virologist at Fred Hutchinson Cancer Research Center and the University of Washington, and a lead author of the study. Peterson’s team modified the CARs to contain a human CD4 domain, which can bind to the HIV envelope protein displayed on infected cells and, in the case of CAR T cells, kill them. The CAR cells also express a membrane fusion inhibitor that prevents HIV infection. 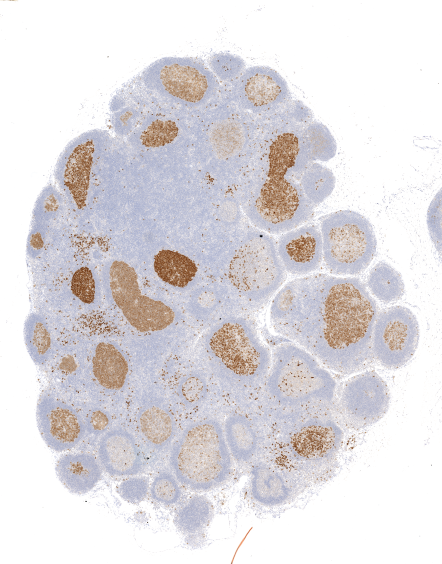 In previous work, team members transplanted CD4-containing CAR stem cells into four macaques.2 They found that the treatment was nontoxic, and that stem cell-derived CAR T cells reduced rebounding levels of the virus. “We could basically turn the CAR T cells on and off as we manipulated the amount of viral antigen in the system,” Peterson said.

CAR cells persist in the blood, but finding them in tissues is more relevant. “For HIV, we always say tissue is the issue. That's where we believe a lot of the virus persists in cells,” said virologist Sarah Palmer from the University of Sydney Medical School, who was not involved in the study.

To test for tissue trafficking, Peterson’s team searched for CAR positive cells in necropsy tissue samples from the four macaques two years after stem cell transplantation and months after antiretroviral therapy withdrawal. Using antibodies that bind human CD4, they found that CAR cells trafficked to various lymphoid germinal centers, the gastrointestinal tract, and multiple sites in the brain, all areas that harbor HIV reservoirs. Additional labeling in germinal center tissue samples indicated the presence of both CAR B and CAR T cells, suggesting that CAR presence did not affect cells’ ability to engraft and proliferate into multiple cell types.

“To our knowledge, this is the first time that any group has shown a cell-based therapy to efficiently traffic to these secondary lymphoid tissues where the reservoir resides. We showed that we can get these anti-HIV cells where they need to go to reduce the reservoir, and I believe that we did that with more efficiency than has been shown in the past,” said Peterson.

Although all of the stem cell progeny carry the instructions to display CAR, Peterson said that stem cell derived CAR T cells are likely the only cells with the machinery needed to kill HIV-infected cells. But high levels of CAR B cells offer the possibility of delivering other anti-HIV cargoes, such as broadly neutralizing antibodies, to reservoirs.

The amount of CAR cells varied between animals, which Palmer said may point to the range in size of the animals’ HIV reservoirs. But it’s hard to know for sure because researchers still grapple with how to effectively quantify the reservoir. Peterson suggested that the variable CAR amounts could be due to a difference in CAR B cells, but it’s hard to speculate due to the small number of animals studied.