Preliminary results from an ongoing trial by Intellia Therapeutics show that a CRISPR-Cas9-based drug can be delivered into the body to target the liver and reduce expression of the gene that causes transthyretin amyloidosis (ATTR).1 This is the first clinical trial demonstrating successful in vivo gene editing; the results suggest that it may be possible to safely edit the genomes of cells in the body.

“For in vivo delivery, the goal is that you can administer CRISPR as a medicine to the patient,” said Laura Sepp-Lorenzino, chief scientific officer of Intellia Therapeutics.

ATTR is characterized by a misfolded version of the transthyretin (TTR) protein that builds up in the heart, nervous system, and kidneys. Patients generally experience pain, weakness, and the inability to control basic body functions. “It's a truly dreadful condition,” said Julian Gilmore, a physician-scientist at the National Amyloidosis Centre at University College London, who led the trial.

Past studies revealed a potentially straightforward path to treatment: reduce the amount of TTR in circulation to reduce disease symptoms. Lower TTR levels slow down protein accumulation. Some previously approved drugs accomplish this with small interfering RNAs or antisense oligonucleotides that help degrade or sequester the RNA encoding TTR.2,3 But these treatments require a pre-treatment followed by weekly or monthly administration of the drug, which causes unpleasant side effects. These treatments often fall short of curing the disease; while symptoms improve, many patients die within 10 years of diagnosis. 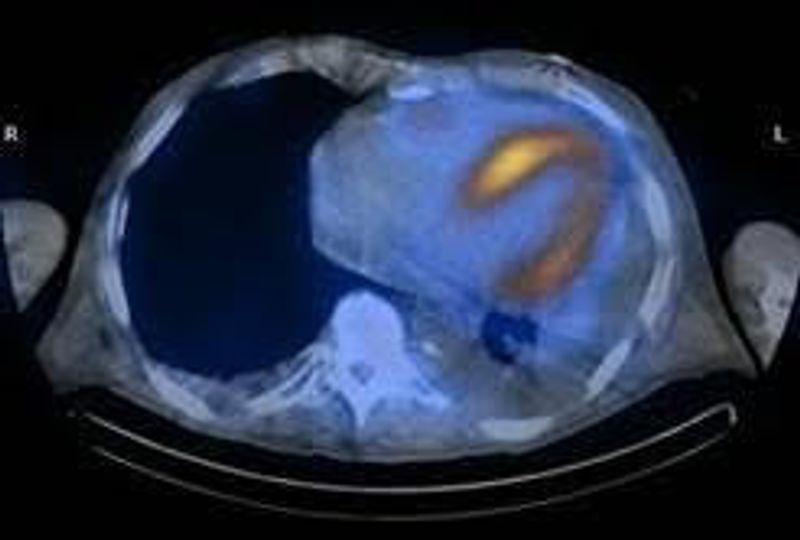 ATTR can lead to the accumulation of TTR protein in various organs, especially the heart (shown in yellow).
Julian Gillmore

The potential to treat ATTR by merely reducing TTR—and the limited effectiveness of prior attempts to do so—made the disease an ideal scenario for CRISPR-Cas9, Gilmore said. The molecular scissors could reduce TTR levels by disrupting the gene that encodes it. This snip is a more powerful way to dampen expression, and a single infusion of CRISPR edits the cells to decrease TTR in perpetuity, which could also repair prior damage. “The goal for Intellia is not only to halt progression of the disease, but potentially to be able to revert and gain function,” said Sepp-Lorenzino.

Using CRISPR to edit cells directly in the body—rather than removing and editing cells in the lab and returning them to the patient—is no small task. Here, ATTR offered a unique advantage. TTR is produced almost exclusively in the liver, an organ that can be specifically targeted for drug delivery. Wrapping a drug in a bubble of fats called a lipid nanoparticle causes it to head straight to the liver, enabling efficient delivery and reducing off-target effects.

Intellia’s lipid nanoparticles contain a guide RNA targeting TTR and mRNA encoding the Cas9 endonuclease that makes the genomic cuts. In their ongoing Phase I trial, they administered the drug (NTLA-2001) to six patients with nerve damage resulting from ATTR. Half of the participants received a lower dose and half received a higher dose. Twenty-eight days after treatment, there were no reports of severe adverse effects.

“I don't think there's any question based on the results that the editing not only works, but works extremely well,” said Kiran Musunuru, a cardiologist at the University of Pennsylvania and co-founder of the CRISPR biotechnology company Verve Therapeutics, who was not involved in the study.

TTR levels were halved in the lower-dose group, and decreased by 80-96 percent in the higher-dose group. The goal is to reduce TTR by 90-95 percent, Gilmore said. For comparison, existing therapies reduce its presence by roughly 80 percent. He was surprised to see that some patients in the trial reached these desired levels already. “It opens up the real possibility that these patients are actually going to improve,” Gilmore said. Future plans are to continue increasing the dosage, which Gilmore expects will lead to better outcomes for more patients.

While initial trial results focus on patients with nerve damage, another class of patients has mainly cardiac symptoms. Gilmore thinks that these patients may benefit even more from this treatment because amyloid accumulation in the heart is particularly responsive to TTR levels. There are plans to test the drug in these patients in the next phase of trials.

If the drug continues to succeed in clinical trials, Sepp-Lorenzino expects that treatment for ATTR patients may one day be as simple as a two-hour infusion of the lipid nanoparticles at an outpatient center.

“It's going to shift from a model where we're taking pills every day or injections every few weeks for long periods of time,” Musunuru said. “Gene editing therapies are going to transform that model into one where you have one-and-done therapies.”

Demonstrating the ability to deliver genome editing machinery to the liver potentially opens the door to editing any gene in the liver and to treating more conditions. Intellia is already working on another in vivo CRISPR drug for hereditary angioedema that knocks out a different gene in liver cells.

It will take more work to target other cell types. For example, scientists may engineer lipid nanoparticles with specific molecules on their surface to interact with a target cell type. An in vivo clinical trial conducted by Editas, a biotechnology company designing CRISPR-based therapeutics, to treat a retinal degeneration disorder with virus-delivered CRISPR-Cas9 also recently showed clinical benefit, although retinal editing doesn’t have as clear of a readout as TTR levels.4

“If we think of CRISPR-Cas9 as revolutionizing medicine, then what we need is to be able to deliver the drug to whichever cells in the body we want,” Gilmore said. “I think that’s the real challenge for the wider application of this technology.”