In Australia’s oldest medical research institute, researchers work to cure an aggressive brain cancer known as glioblastoma. The last decade has transformed the field of cancer research; blood cancers that were once death sentences now have treatment options. But glioblastoma remains a deadly enigma. 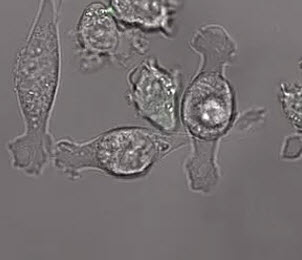 “I realized there was hardly any research happening in brain cancer, and applying immunotherapy there was the bold and ambitious plan we set for ourselves,” said immunologist Misty Jenkins, an associate professor at the Walter and Eliza Hall Institute of Medical Research in Melbourne, Australia. In a new study published in Clinical & Translational Immunology, Jenkins and her team reported that a novel chimeric antigen receptor (CAR) T cell eliminates human glioblastoma cells transplanted into the brains of mice.

“We genetically engineered a receptor to recognize our tumor target. In this case, we're targeting a protein that's exquisitely tumor specific. It's only found on tumor cells,” Jenkins said. “You need to have very specific targets [in the brain] that only take out the diseased cells but keep the healthy cells unharmed.”

Using CAR T cells isn’t a new approach, but Jenkins and her team took the method to the next level. They used a highly specific molecular approach—a human retained affinity screen—to make a single chain antibody and reconfigure it as a CAR. The resulting CAR, called GCT02, was long-lived and had a very high affinity for the epidermal growth factor receptor mutant variant III (EGFRvIII) found on brain tumor cells.

One challenge for Jenkins’ team is that not all tumors express EGFRvIII. This means that some of the tumor cells could be left behind to grow after treatment.

“I don't think that going after one protein target in a brain tumor will be the silver bullet,” Jenkins said. “We absolutely need to use combination therapies and be targeting multiple proteins, multiple tumor antigens at once. The heterogeneous nature of tumors like glioblastoma make them incredibly difficult to treat.”

Location is critical for treating cancer, particularly in the brain, where complete surgical resection is nearly impossible. “A brain cancer such as [glioblastoma] grows in a very infiltrative fashion like the roots of trees,” said Hideho Okada, a cancer immunologist at the University of California, San Francisco, who was not involved in the study. “Even if you think you took the whole thing out, there are always bad cells—tumor cells—left behind.”

With studies such as this, both Jenkins and Okada have hope for the future of glioblastoma treatment. In fact, Jenkins recently pitched the novel CAR, GCT02, for a clinical trial. If approved, this study would become the first CAR T clinical trial for brain cancer in Australia.

“We've entered a new era of personalized medicine,” Jenkins said. “What's exciting is that this is the way of the future: to treat patients with a very personalized and targeted approach.”