In the guts of patients with inflammatory bowel disease (IBD), adenosine triphosphate (ATP) produced outside of cells leads to intestinal inflammation. Francisco Quintana, an immunologist and neurologist at MIT’s Broad Institute and Harvard Medical School, and his colleagues engineered an inflammation-sensing yeast probiotic that neutralizes the inflammatory molecule.

In mouse models of IBD, the probiotic performed as well as or better than standard therapies for IBD. The approach could work to mitigate inflammation not only in the gut, but also in other parts of the body, such as the central nervous system.

“It’s a brilliant study, very original,” said Ari Waisman, a molecular biologist at the Johannes Gutenberg University Mainz, who was not involved in the new research. “The idea alone deserves 10 points just for that.”

Most current IBD therapies such as antibodies that target tumor necrosis factor (TNF) suppress the immune system across the entire body, making patients susceptible to infection and some types of cancer. 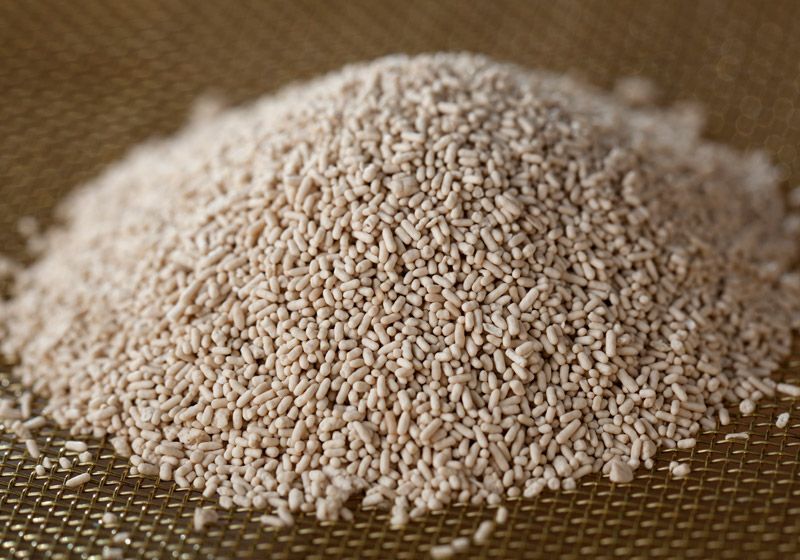 Scientists engineered the yeast that produce beer and bread to seek out and neutralize inflammation in the guts of mice modeling inflammatory bowel disease.
Savany

The systemic approach to IBD treatment did not sit well with Quintana. “When we talk about inflammatory bowel disease or any autoimmune disease, we tend to think that the whole organ is on fire,” Quintana said, but “there are also many areas [of the gut] that are relatively okay.”

Treating IBD in a systemic manner is like covering an entire body part such as the arm with petroleum jelly and bandages after getting a cut on the elbow.

By engineering yeast robots that sense and neutralize inflammation, Quintana and his team developed a new kind of therapy that acts only on the inflamed areas.

The researchers engineered Saccharomyces cerevisiae, the same yeast species that facilitates bread and beer-making, to detect ATP with a human receptor. They linked the activation of this receptor to the secretion of an enzyme, apyrase, that degrades ATP.

The result is a yeast probiotic that senses a pro-inflammatory molecule, extracellular ATP (eATP), and generates a proportional and self-regulated response to neutralize it, Quintana and his colleagues reported in Nature Medicine.

In mouse models of IBD, the yeast probiotic suppressed intestinal inflammation and reduced intestinal fibrosis to a similar or better extent than standard therapies, which often associate with adverse events.

“Therapies like anti-TNF have a lot of possible problems because you need TNF in the body,” Waisman said. “But the yeast go more or less to the right place.”

The therapy also helped restore the balance of gut flora in the animals. “We will have to see how it works in people eventually,” Waisman said.

For Quintana, the research is just the beginning. He envisions optimizing the engineered yeast by making it responsive to other stimuli in addition to eATP, and by incorporating other anti-inflammatory activities such as secreting cytokines or antibodies.

“We think of the yeast as the next step of personalized medicine,” Quintana said. Rather than adjusting therapy to a patient’s genetic background, “This is going one step beyond that to adjust therapy only to those specific areas of the patient that are diseased.”

The unique platform has the potential to help with other inflammatory conditions, including diseases like Parkinson’s disease that are anchored or initiated in the gut.

“At the end of the day, what we’re doing is changing the program,” Waisman said.