With the world under lockdown in March of 2020, Drew Hall and Eliah Aronoff-Spencer often found themselves on the phone late into the night. Aronoff-Spencer, an infectious disease physician-scientist from the University of California, San Diego (UCSD), was on the frontlines of the developing SARS-CoV-2 pandemic, while Hall, an engineer also at UCSD, was “sitting around wondering how can we help.” The two spitballed ideas, musing on what they could do that would be meaningful and impactful.

After more phone calls, months of innovative and round-the-clock work, and a grant from the National Institutes of Health Rapid Acceleration of Diagnostics (RADx) Tech Initiative, the team introduced a fast, accurate, and economically-viable diagnostic test for COVID-19. With a team of researchers, Hall and Aronoff-Spencer repurposed an off-the-shelf glucometer to detect SARS-CoV-2 infection from patient saliva within an hour. The approach may facilitate screening for SARS-CoV-2 infection at-scale.

From the beginning, Hall and Aronoff-Spencer had goal posts in mind. They wanted to start with a saliva sample because, “It’s not blood, it’s not poop, and it’s easy to get to,” said Aronoff-Spencer, and they wanted to end with a commodity piece of diagnostic equipment that is widely accessible. But they had to fill in the middle: how to test.

On one of those late-night phone calls, they landed on the "Aha!" moment. The two were tossing ideas back and forth when Hall proposed using a glucometer. The idea stopped the conversation. “There was just silence. You could hear both Eliah and myself thinking, ‘Hmm. That’s how to do this; that’s the right thing to do.’” 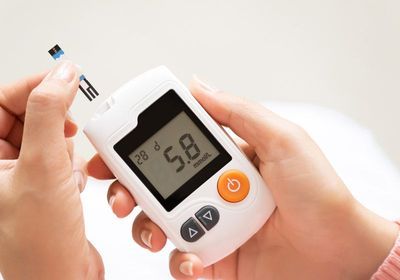 Glucometers are widely available diagnostic devices that have been repurposed to quantitatively measure cocaine, food-borne pathogens, and hepatitis B, among other non-blood sugar substances. They are small, inexpensive, and user-friendly.

The building block fell into place, but it presented another challenge. “At a fundamental level, we were trying to take viral protein, either the N or S protein on [SARS-CoV-2], and translate that into glucose,” Hall said. “That’s a non-obvious translation.”

Another challenge was that glucometers are not the most sensitive devices. The researchers had to figure out how to not only convert the signal from viral protein to glucose so that the glucometer could detect it, but also amplify the signal as well.

A search through the literature revealed an aptamer-based competitive assay and an enzyme from the food processing industry known as invertase. The team combined these components so that when SARS-CoV-2 N or S antigen from patient saliva bound to aptamers, they released prehybridized antisense oligonucleotides bound to invertase, which then hydrolyzed added sucrose into glucose. Together, the pieces added up to a sensitive and accurate diagnostic device with a readout proportional to the concentration of viral antigen in the sample.

When Hall and Aronoff-Spencer’s team tested how well the tech worked, they found that the assay discriminated between saliva samples from healthy individuals and SARS-CoV-2-infected patients across a range of viral loads with complete accuracy, the researchers reported in Biosensors and Bioelectronics.1

“I love the idea of having inexpensive, at-home diagnostic tests, and this is a really unique strategy,” said Julie Parsonnet, an infectious disease expert at Stanford University, who was not involved in the research. “It’s something that could be adapted to other viruses down the line, which also makes it appealing.”

But she’s not completely sold on its accuracy. “It would be great to see it tested on more people in a real population setting,” she said. “There’s a big difference between what happens when people in the laboratory are testing something than compared with somebody in the real world who may be less familiar with what they’re expected [to do], and how to do it.”

Hall and Aronoff-Spencer agree. The tech works, but “that’s very different from… running 100,000 tests a day by users at home where they’re making mistakes,” Aronoff-Spencer said.

“These [results] should all be taken as feasibility, not problem solved,” he added. Or, at least it is not a solved problem yet. “COVID’s shown us that the more we can push the power of diagnosis into more hands, [then] we can be a lot more agile in preventing the next pandemic,” Aronoff-Spencer said.