When David Berry, a microbiologist at the University of Vienna, walked through the neonatal intensive care unit for the first time more than five years ago, the experience turned the tide of his career. Berry had been working on chronic inflammation conditions, such as inflammatory bowel disease. But that changed when he set eyes upon the very small and extremely vulnerable patients there.

“Nothing against chronic diseases in adults,” Berry said, “but it really feels like this is an area where we can do something that could change the outcome of people’s lives in the long term. That really touched me and really motivated me.”

Every year, 10 to 15 percent of infants born in the US spend some amount of time in the neonatal intensive care unit, or NICU. Often these babies need extra assistance breathing or eating on their own. Full-term babies that are small, twins or other multiples, and especially babies born early often occupy NICU beds, with strings of tubes taped to their tiny arms and across their chests.

Extremely premature infants—babies born before 28 weeks’ gestation—spend the third trimester, a critical time period for growth and brain development, outside of the womb. Preemies that survive are at high-risk for brain damage from complications such as inflammation, sepsis, insufficient oxygen, and bleeding in the brain or heart. They can suffer learning disabilities and other long-term problems that result from these events.

In a recent study in Cell Host & Microbe, Berry, along with Lukas Wisgrill, a neonatologist at Medical University of Vienna, and their colleagues found that gut microbes set off inflammation that exacerbated brain injury in extremely premature infants soon after birth. Targeting the gut microbes may offer a novel intervention strategy for this vulnerable population.

“This study’s important, because we might be able to identify some of the gut microbial signatures that might help highlight some of the babies that are more at risk, which might mean that they can get some more additional kind of clinical care,” said Lindsay Hall, a microbiologist at Quadram Institute Bioscience and the Technical University of Munich, who was not involved in the research.

Studies in mice suggest that the gut microbiome—the collection of bacteria, fungi, and other micro-organisms living within the gastrointestinal tract—can influence the brain as well as the immune responses to brain injury. However, the microbiome and immune system have not yet fully developed in extremely premature infants, and microbial shifts may negatively influence the brain. Wisgrill and Berry aimed to improve the neurodevelopmental outcomes for these tiny patients by examining the gut-immune-brain axis. 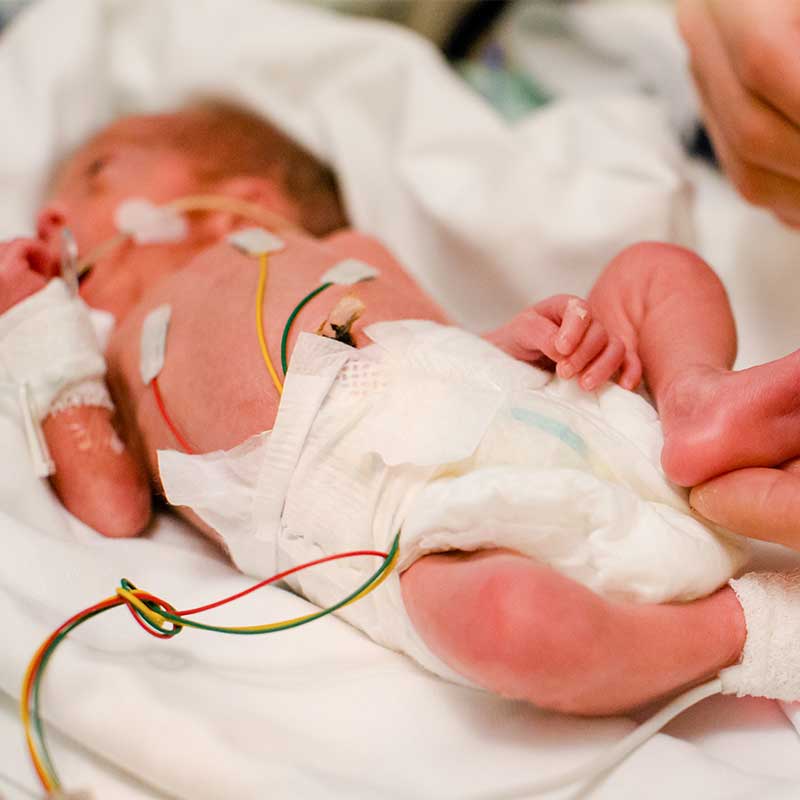 Following the idea that there are critical developmental windows where the microbiome may play a significant role, Berry and Wisgrill planned to characterize what happens in the first months of life for these premature babies.

They looked at the gut microbiome, the immune system, and neurodevelopment to see if there is coordinated development between these systems and to identify microbial patterns associated with brain damage in preemies.

To do so, Berry and Wisgrill established a unique patient cohort of 60 extremely premature infants. Then, with the aid of a highly interdisciplinary team, they analyzed each part of the gut-immune-brain axis over time from birth to discharge, weeks to months later. By sequencing the gut microbiome, assessing the immune system and serum protein measurements, measuring brain electrical activity, and performing magnetic resonance brain imaging, they closely investigated the evolving microbiome, immunological landscape, and brain development.

The analyses uncovered a time window of about four to six weeks after birth where preemies harbored a distinct microbiome profile dominated by Klebsiella bacteria. The overgrowth of Klebsiella in the gut associated with aberrant immune development, and in particular, an increase in a special type of immune cell known as gamma delta T cells.

Klebsiella overgrowth also associated with and predicted the development of neurological damage in premature babies, indicating that shifts in the microbiome associated with gamma delta T cells could affect neurodevelopment.

The microbial patterns and immunological responses showed up prior to changes in the brain, suggesting a critical time window for novel prophylactic and therapeutic interventions, such as probiotics or oral antibiotics to reduce Klebsiella loads in these high-risk infants.

“What they found is really interesting,” said Hall, who called the study “rigorous and important for the field.” But because the study was conducted at a single hospital, she’d love to know how generalizable the findings are, or whether they are particular to the NICU from the study.

“Hospital-acquired bacteria are a big problem,” she said, and although there are some similarities across different NICUs, “the types of bacteria and strains that are circulating in the hospital environment are different hospital to hospital and NICU to NICU.”

For Berry, the study is observational, one that opens up research directions to look deeper into mechanisms. He and Wisgrill plan to follow the infants from the study cohort for at least five more years to assess long-term cognition and learning, as well as the gut microbiome.

They want to find out how Klebsiella establishes in the guts of preemies and why it’s overgrowing. They also plan to look at whether commensal or beneficial bacteria could suppress Klebsiella growth and whether they could target increases in gamma delta T cells to improve neurodevelopment in preemies.

“It’s a little bit early to go into the clinic and suggest interventions,” Berry  said. “But honestly, what I envision is that in the next three to five years, we have the mechanisms of what’s happening, and then we can justify looking at targeted interventions.”