The chance of living to be 100 years old is not out of the question, but it’s certainly not guaranteed. Those who manage to celebrate their triple-numbered birthday are less susceptible to illness and chronic inflammation than those who don’t.

In research published in Nature, Kenya Honda, a microbiologist and immunologist at Keio University School of Medicine, and his colleagues showed that a clue to centenarians’ long lives may be in their guts. Microbes that produce unique bile acids in the intestines of 100-year-olds may keep inflammation and aging-related illness at bay.

“This was a unique study that allowed us to look at the microbiome at the extreme of aging,” said Ramnik Xavier, a gastroenterologist and molecular biologist at the Broad Institute and Harvard University, who authored the study with Honda. “Could we identify microbial features unique to centenarians and then use that to get to the biology?” 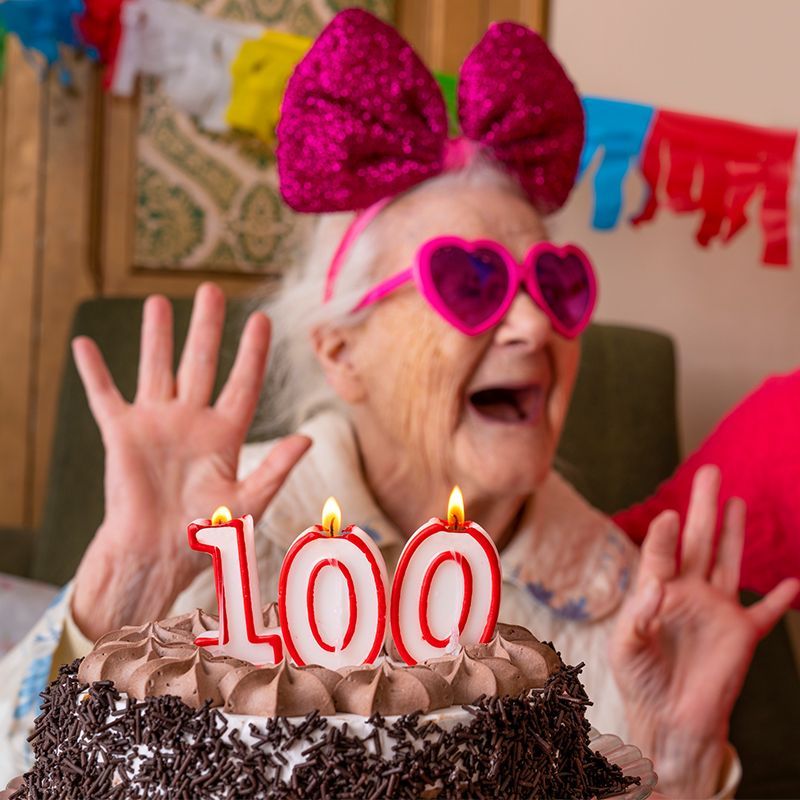 Celebrating a 100th birthday may come down to the gut microbiome.

Individuals who make it past their 100th birthdays are less likely to have high blood pressure, diabetes, and cancer, among other diseases that associate with aging. Honda suspected that external factors, such as the gut microbiota, might contribute to preventing the development of these age-related diseases in long-living individuals.

The microbiome regulates bodily functions including digestion, bone density, neuronal activity, and immunity. Honda and his team aimed to identify beneficial bacteria from the microbiota of centenarians that might help others ward off infection and other stresses.

Honda and his colleagues recruited 160 Japanese centenarians and collected fecal samples from them. They also collected samples from elderly Japanese people around 85 years old and young people about 30 years old. Then they compared the microbiomes and metabolites between the cohorts.

The team found that the microbiomes of centenarians differed from the other two groups. Centenarian microbiomes had more Proteobacteria and Synergistetes and fewer Actinobacteria species than microbiomes in the other two cohorts. But what Honda found much more intriguing were the results of a metagenome analysis, which revealed increased abundance of bile-acid-inducible genes in the 100-year-old-plus age group. Some bile acids play a role in host metabolic and immune responses, including blocking pathogens such as Clostridium difficile from colonizing the intestines.

Honda and his colleagues found that a bile acid called isoallolithocholic acid (isoalloLCA) was enriched in samples from centenarians. A follow-up screen identified isolates belonging to the bacterial family Odoribacteraceae, which are capable of producing isoalloLCA.

When the researchers administered Odoribacteraceae to mice infected with C. difficile, a prominent antibiotic-resistant threat, the treatment reduced bacterial shedding to below detectable levels. Honda and his colleagues also showed that isoalloLCA had strong bactericidal effects on other Gram-positive bacteria, such as the antibiotic-resistant Enterococcus faecium.

Given the link between isoalloLCA-producing Odoribacteraceae and centenarians, “these bacteria might contribute to longer lifespans by providing colonization resistance against Gram-positive pathogens and contributing to maintenance of gut homeostasis,” Honda wrote in an email.

Although they don’t have data showing a causal relationship, the research hints at how beneficial bacteria may help centenarians age well, which is unique for microbiome studies, according to Simone Rampelli, a bioinformaticist and microbiome expert at the University of Bologna, who was not involved in the work.

“When one can identify a unique microbiome signature or unique microbial metabolites that are associated with centenarians, then one can begin thinking about what can be done to mimic those features,” said Xavier.

The researchers don’t have evidence for a microbial therapeutic that will extend the lifespan, but Honda is now interested in exploring isoalloLCA-producing Odoribacteraceae as a potential therapeutic for C. difficile infections.