Chimeric antigen receptor (CAR) T cell therapy has had great success in treating blood cancers. But when it comes to solid tumors, the therapy often misses the mark. In solid tumors such as sarcomas, the tumor microenvironment suppresses CAR T cells, making them less effective.

Using synthetic biology, Gabriel Kwong, a biomedical engineer at Georgia Institute of Technology and Emory University, has developed a technology to control T cell therapies with heat and make cancer cells more sensitive to chemotherapy. The new technology may turn the tables for CAR T therapy success in solid tumors.

“The idea of spatially controlling the function of cell therapies is a really important and emerging idea,” said Mikhail Shapiro, a chemical engineer at the California Institute of Technology, who was not involved in the research. “This work is a very important step in demonstrating that it works in vivo in a realistic cancer scenario.” 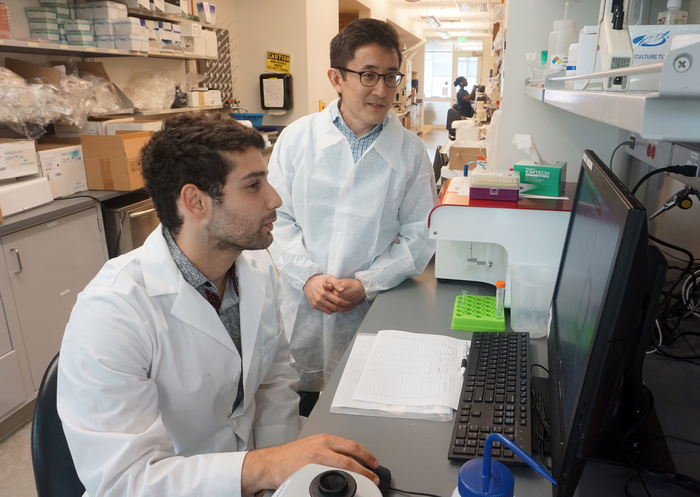 As an engineer, Kwong has a unique philosophy. Rather than building a gadget and then trying to find the best application, Kwong tries to identify the main bottlenecks in a field first, then he works to design a solution. In the new research, he wanted to control when and where CAR T cell therapy turns on and keep the cells off everywhere else.

He and his team were inspired by the field of optogenetics, which uses light to control cell activity. Light, however, is not the best stimulus for cancer treatments because it scatters in healthy tissue and can only penetrate about 1 centimeter of tissue at most. In contrast, heat can be deposited at very precise locations in the body.

Kwong and his team used gold nanoparticles that can take in the energy of near-infrared light and convert it to heat in a spatially-controlled fashion. They engineered gene switches in CAR T cells that would enable the cells to respond to increases in temperature of about three to five degrees Celsius, a bump much milder than drinking hot coffee or other warm liquids.

The researchers administered gold nanoparticles, which passively accumulate in tumors, via IV injection into mice with hind limb tumors that had received the engineered CAR T cells. Then they irradiated the tumors with near-infrared light to raise the temperature.

“Where we can spatially control [CAR T cell] activity inside a tumor can actually significantly improve antitumor responses,” Kwong said.

The treatment also prevented relapse in the mice. Mice that received heated phototherapy treatment stayed tumor-free for more than 45 days, whereas tumors returned in the cohort treated with typical CAR T cells.

“It’s at the very beginning of this revolution in medicine, and there are many cool new ways of attacking the problem,” Kwong said. “We need more big brains to work on this problem together.”