Han Xiao, a protein chemist at Rice University, and Shawn Zhang, a cancer biologist at Baylor College of Medicine, received an email with a big question: “When will your drug go to clinical trials?” The question came from a patient eager to try out a drug for breast cancer that had metastasized to the bone. When cancer spreads beyond the tissue where it developed, especially to bone, patients’ outcomes become less optimistic. More than hope hung on the patient’s email.

Xiao and Zhang developed an innovative therapeutic technology that sends medicine right to cancerous bone tissue by combining two drugs the U.S. Food and Drug Administration (FDA) has already approved. By delivering therapy to tissues such as bone that are notoriously difficult for medicines to access, the new technology, dubbed BonTarg, could be a game changer for patients with metastasized breast cancers and other cancers and bone diseases.

“It’s quite exciting, particularly because bone metastasis is such a huge problem in breast cancer,” said Alana Welm, a breast cancer biologist at the University of Utah’s Huntsman Cancer Institute, who was not involved with the new research. 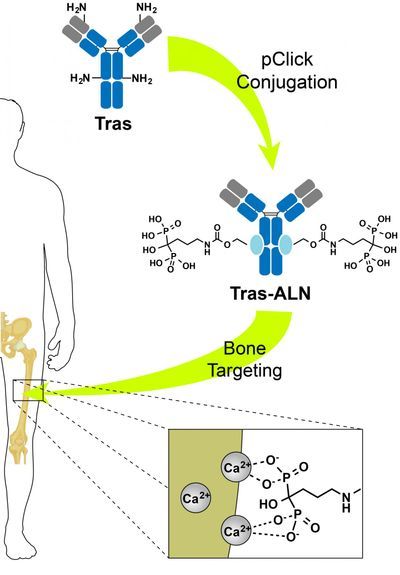 A new technology targets an FDA-approved antibody therapy to cancer in the bone.
Baylor College of Medicine and Rice University

Bone is often the first site of metastasis. Once cancer spreads to bone it will almost inevitably spread to other organs such as the lung, liver, and brain. Metastasis makes cancer difficult or impossible to cure. Metastatic breast cancer, for example, is incurable.

Most metastases originate from other metastases, not the primary tissue. Zhang’s group recently showed that bone can act as a launchpad for further metastases.1 They seeded invasive and less aggressive human breast and prostate cancer cell lines in the hind limbs of mice. Within four to eight weeks, they saw metastases in the rodents’ lungs, livers, kidneys, brains, and additional bones.

Follow-up experiments revealed that once cancer cells are growing in the bone microenvironment, they become more plastic and take on stem cell-like properties. These features allow cancer cells to better adapt to new environments. They leave the bone and spread to other organs, which further advances the disease. Zhang and his team also found that primary metastases in bone can remain small, indicating that further metastases could spread to other organs before the first ones are detectable.

“Anything we can do to keep the disease either not going to bones, or to really treat it well once it’s in the bones, could actually have outcomes for overall survival,” Welm said. Treating bone metastases could also alleviate bone pain, spinal compression, and fractures that can make patients’ lives “quite awful,” Welm said. To intervene when cancer has only spread to bone represents a huge therapeutic opportunity.

To get ahead of the metastatic launchpad in the bone, Zhang and Xiao planned to specifically target breast cancer-derived bone metastases. They started with a proven drug called trastuzumab. Commonly referred to by its brand name Herceptin, trastuzumab is an antibody therapy that targets human epidermal growth factor 2 (HER2), a protein that cells make too much of in about a quarter of breast cancers. The antibody prevents HER2-expressing cancer cells from initiating a cascade of events that leads to proliferation, and may also induce cytotoxicity by attracting the immune system’s natural killer cells.

Trastuzumab is a proven therapy that, when given in combination with chemotherapy, has extended overall survival in metastatic breast cancer patients to nearly five years.2 But the drug is not a cure. For many patients, their cancer continues to progress while they are under treatment, and for most, remission rarely lasts.

Bone metastases do not kill patients as often as metastases to internal organs such as the lung or liver, so they do not receive a lot of attention in research. But according to Zhang, “Targeting bone metastasis not just kills cancer cells in the bone, it has the potential to prevent cancer cells from going other places in the body.”

One difficulty lies in getting drugs to the bone. Despite making billions of blood cells every day, bone tissue holds few blood vessels. Where it does have vasculature, a bone marrow-blood barrier makes it hard for therapies delivered through the circulatory system to arrive at their destination. In addition, antibodies are big molecules. The mineralized matrix structure of bone prevents big molecules from gaining access to the tissue, limiting how effective a drug can be.

In the past, patients were given high doses of antibody therapies to overcome hurdles of getting them to bone. But then the drug ended up in tissues besides the bone, leading to unwanted and sometimes systemic side effects.

“People think of antibody drugs as magic bullets that only target cancer cells while missing healthy cells,” Xiao said. “But research in the clinic has shown that not to be true.”

That discrepancy drove Xiao to increase the specificity of the bullet so that it goes to the cancer, but not the healthy tissues. In the new research, he equipped the antibody therapy with a homing device.

Alendronate is a bisphosphonate drug with high affinity for the highly mineralized bone matrix. It has been used to selectively deliver imaging probes, nuclear medicines, and nanoparticles to the bone, and the FDA has approved it to treat bone maladies such as osteoporosis. Xiao joined alendronate to the monoclonal antibody trastuzumab to target the therapy to bone.

Next, Zhang and his team injected the modified drug into the intra-iliac artery, a branch of a major artery in the lower abdomen, of mice with tumors in the hind limb bone derived from a breast cancer cell line.

Within 24 hours, the drug accumulated in the bone and remained there for a week. In contrast, injection with unmodified antibody did not remain in bone past the first day of treatment. The bone-targeted drug also accumulated much more substantially in cancerous bone compared with healthy bone, thanks in part to alendronate’s affinity for the highly acidic environment of bone metastatic sites.

The conjugated antibody therapy also prevented the development of secondary metastases in most other organs. Zhang and his team let the bone tumors grow for about eight to 12 weeks. Mice treated with trastuzumab harbored metastases in the heart, liver, spleen, lungs, kidney, and brain. Mice treated with alendronate conjugated trastuzumab, however, were mostly devoid of secondary tumors, Zhang and Xiao reported in Science Advances.3 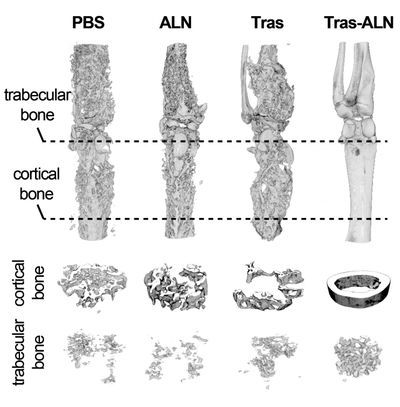 Scans of rodents treated with alendronate-conjugated trastuzumab, individual components, or a salt solution.
Baylor College of Medicine and Rice University

“The work that they’ve done here is quite translatable [to the clinic],” Welm said. She added that a trial will likely be straightforward as long as Xiao and Zhang can create a clinical grade version of the compound. The next step is to see whether the therapy works in models with cells derived from patients rather than established cell lines.

“For these antibody drugs, even though [trastuzumab] is an older drug, people can modify the antibody, like what we are doing…and get more potential from this drug,” he said.

The technology allows scientists like Xiao and Zhang to come one step closer to the magic bullet that will take out cancer cells while leaving healthy cells alone. “This conjugated antibody is one of the most perfect, best solutions in my mind, to help us gather the bullets to where they need to be,” Zhang said.

The team hopes to be ready in time to help the patient who emailed them. “This drug can be the next wave of drugs for this patient,” Xiao said. “We can get a better outcome for her. We want to push this drug to clinical trials as soon as possible, and hopefully this patient can benefit from it.”