Tangled spikes extended outward in all directions from a mass of mammary tumor cells until researchers treated them with a microRNA. This treatment set off a cascade of events that induced the cells to reverse a hallmark in cancer progression known as the epithelial-mesenchymal transition (EMT). Then the organoids became smooth, round blobs.

Jeffrey Rosen, a molecular biologist at Baylor College of Medicine, and his colleagues used the extreme shape change to identify drugs that reverse EMT and make cancer more susceptible to chemotherapy. This approach could facilitate the rapid repurposing of FDA-approved drugs.

Rosen has been looking into how cancer cells resist chemotherapy. He was particularly interested in triple-negative breast cancer (TNBC), a diverse group of tumors defined by the fact that they do not express three receptors commonly found on other types of breast cancers. A targeted therapy for TNBC does not yet exist. Patients with a subtype known as claudin-low TNBC have high rates of metastases, and their tumors are resistant to chemotherapy. 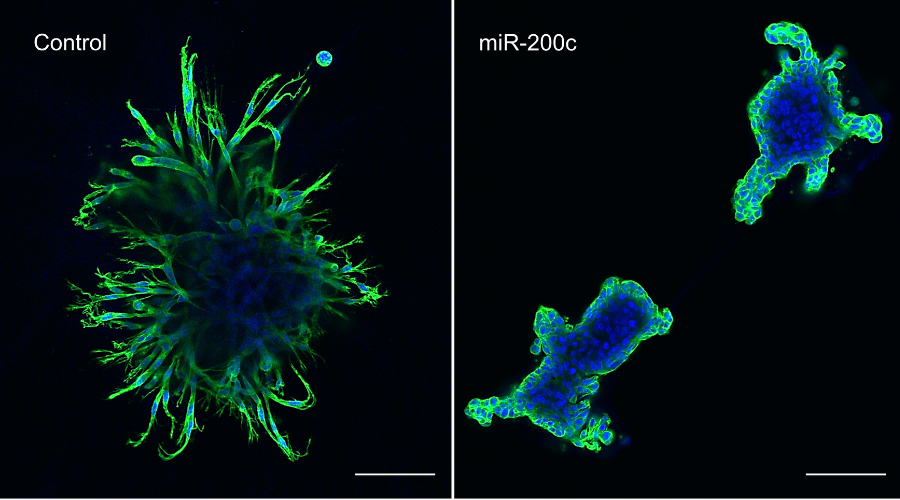 That’s in part because claudin-low TNBC tumors are highly mesenchymal. When cancer cells undergo the EMT, they take on metastatic properties such as enhanced motility and invasion, and they become more resistant to cell death. Rosen decided to screen for drugs that forced the cells to become less mesenchymal to see if that would make them more sensitive to chemotherapy.

When he and his team used claudin-low mammary tumor cells to make organoids, they saw that the organoids “formed these spiky, sort of porcupine-like structures,” Rosen said.

When the researchers induced the expression of a microRNA called miR200c in the organoids, they saw that the porcupine-like structures rounded out. Rosen then drew on a collaborative network of cancer researchers based in Houston to develop a drug screen that uses an unusual read-out.

Rather than looking for cell death, which is typical for cancer drug screens, the researchers used neural network analysis of images looking for a shift from the spiky, porcupine structures to rounded ones. With this approach, they screened a small library of epigenetic drugs, which are small molecules targeting various DNA modifications such as methylation and acetylation.

Using two independent models for the screen, the researchers identified 10 compounds that reversed the EMT in the claudin-low organoids; they reported their results in Nature Communications.1 However, because tumors are so heterogenous, reprogramming all of the cells is not realistic.

No drug “has been a homerun by itself,” Rosen said. But that’s alright, he added, because, “You’re not going to use these as single agents. You’re going to use them in combination with standard of care, which for triple-negative breast cancers, is chemotherapy.” The bigger question was how to combine them.

When Rosen’s team treated mice modeling TNBC with either the epigenetic drugs or chemotherapy alone, the mice survived a few days longer than without either treatment. But combining the treatments extended survival by weeks, indicating that the morphological screen can identify drugs that may be useful for combination therapy.

“We can reprogram enough cells that we can get a good bystander effect with chemo- or immunotherapy, and that may have some clinical significance,” Rosen said.