Angry red pinpricks, itchy hives, and purplish bruise-like spots on the skin often result from allergens or stress. Now, it appears that skin rashes may also signal COVID-19. Researchers discovered that skin rashes cluster with other symptoms of SARS-CoV-2 infection and predict a positive test result.

“Our results suggest that skin manifestations should be included in the list of symptoms to look for when suspecting infection,” Veronique Bataille, a dermatologist at King’s College London, who conducted the new research, wrote in an email.

Over the course of the pandemic, it became clear that infection with SARS-CoV-2 affected more than the lungs. Within the first few months, healthcare workers around the world noticed that patients had itchy, red welts, swelling of the face or lips, and red or purple sores or blisters on their feet or toes. During the first lockdown when people were at home with no testing and little support, there was a rising incidence of new skin rashes.

“We were concerned that this was not picked up as a sign of COVID infection,” Alessia Visconti, a genetic epidemiologist at King’s College London, who authored the new research with Bataille, wrote in an email. 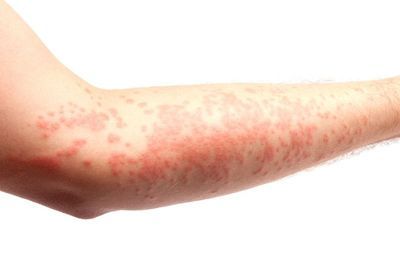 Red welts on the skin may be a sign of infection with SARS-CoV-2.
Credit: gokhanilgaz

There was no indication whether skin symptoms could be used to predict infection, and at the time, no resources for general practitioners or other healthcare professionals to distinguish between SARS-CoV-2-related skin symptoms and unrelated skin conditions, such as eczema exacerbated by frequent handwashing.

To figure out whether skin symptoms could help diagnose COVID-19, Bataille, Visconti, and colleagues used social media to recruit more than 336,000 volunteers to use an app that collected user data on everything from sex, age, and ethnicity to chronic conditions and medication use. Participants provided daily updates on COVID-related symptoms, including rashes and sores or blisters on the feet. The app also prompted users to report whether they had had a SARS-CoV-2 test. In addition, nearly 12,000 participants completed an online questionnaire about skin symptoms.

Data collected from the app showed that the odds of testing positive for SARS-CoV-2 infection was 1.7 times higher with a skin manifestation compared with a lack of skin symptoms. The finding indicates that skin symptoms are better predictors of infection than fever.

Results from the survey revealed that skin rashes are often the first or only symptom of SARS-CoV-2 infection. Skin symptoms appeared before any other symptoms in 17 percent of SARS-CoV-2 positive cases. In 21 percent of cases, it was the only symptom, the researchers reported in the British Journal of Dermatology.1

“That is one of the most important things that’s coming out of this paper,” said Esther Freeman, director of Global Health Dermatology at Massachusetts General Hospital in Boston and principal investigator of the COVID-19 Dermatology Registry, who was not involved in the research. “These patients would not have necessarily met U.S. Centers for Disease Control and Prevention or United Kingdom National Health System criteria for COVID testing.”

“For anybody who has not had a skin condition before, any new skin rash should be regarded as a possible sign of COVID, and should request a test,” Visconti said.