When Thimios Mitsiadis was young, he wanted to be an astronaut. As he got older, he thought he would like to become a musician. Later, he considered becoming a priest. But both of his parents were in education, and the house he grew up in was full of books. Now, he too is an academic. The environment he grew up in nudged him along a particular life path.

Now as a developmental biologist at the University of Zurich, Mitsiadis leads a team of researchers who recently discovered that interactions with different environments, rather than inherent cellular differences, may drive the unique behaviors of stem cell populations in human teeth. The findings open new pathways for dental therapy, including cell-based regenerative treatments. 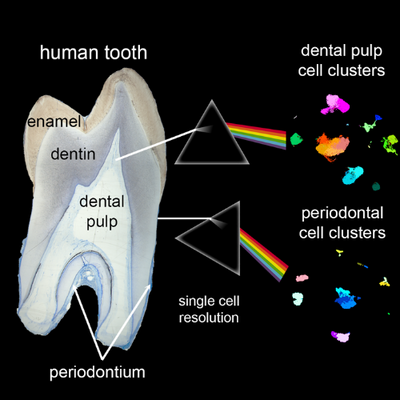 The human tooth under the prisms of single-cell resolution.
Thimios Mitsiadis, University of Zurich

Beneath the hard enamel crown of teeth lie layers of deeper tissues, each with distinct primary functions and behaviors. At the tooth’s core is dental pulp, a highly vascularized and innervated tissue. Dental pulp harbors odontoblasts, cells that form the tooth’s second layer. The periodontium anchors teeth to the ridge of bone that contains the tooth sockets. This serves as the tooth’s great stabilizer, absorbing the shocks and stresses of chewing, a feat that requires constant, dynamic remodeling. Both tissues contain multipotent mesenchymal stem cells, which researchers evaluate for their potential to regenerate tissues.

Mitsiadis is particularly interested in how to recreate tissues from scratch. He plans to identify what disrupts the balance of homeostasis in pathological conditions and learn to replace the damaged or injured tissue. But to discover how to recreate these tissues, he first needs to understand how they work.

What differed between the tissues was the microenvironment the stem cell populations inhabited. Fibroblasts were the most abundant cell type in the dental pulp, whereas epithelial cells dominated the periodontium, the researchers reported in iScience.1

Just as Mitsiadis’ home environment nudged him towards academia, the microenvironment appears to influence the behavior of dental stem cell populations.

Mitsiadis likened the findings to following local customs. “I’m Greek, and in Greece, maybe the regulations are not applied so much. But I work in Switzerland. I have to obey the rules. I am the same person, but I’m behaving differently,” he said.

“We are very happily surprised because you have some cells that are festive, they are joyful, they like to recreate,” Mitsiadis continued. “But it depends on where the cells are… They obey the rules of the environment.”