For Christian Hinrichs, an oncologist who leads the cancer immunotherapy division at the Rutgers Cancer Institute, the search for effective treatments is more than just an interesting scientific question—it is a personal one. His own bout with cancer more than a decade earlier made him acutely aware of just how important it is to find therapies that completely eliminate tumors, steering his research toward engineering patients’ own cells to find and kill cancer cells and running clinical trials to bring these treatments into practice.

How did your own experience with cancer inform the direction of your research? 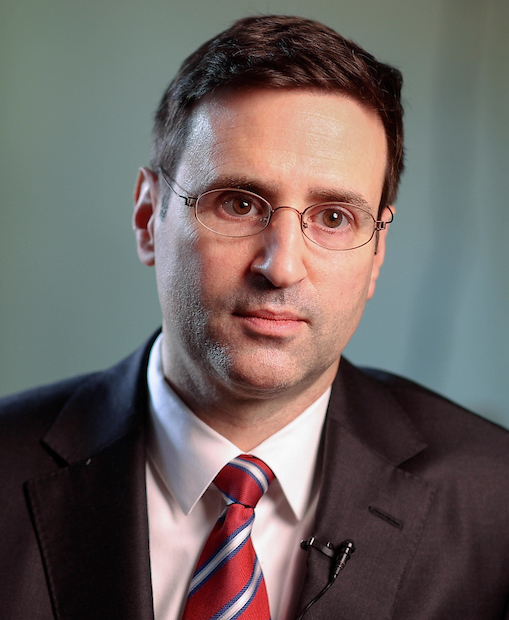 Christian Hinrichs draws from his prior experience as a cancer patient to design engineered T cell-based tumor immunotherapies.
Courtesy of John O’Boyle

I trained initially as a general surgeon, but after I finished my training, I recognized the limitations of surgery, especially in the setting of advanced cancers, so I started conducting research on tumor immunology. But my research wasn’t as clinically applicable as I wanted it to be because it did not address the types of cancer being treated in the clinic where it could make the biggest impact. It was during that period that I was diagnosed with cancer and ultimately lost an eye.

When you lose an eye and you are a surgeon, it is career-altering. I do not necessarily represent all people who face cancer, but from my perspective, if my cancer comes back, it will be fatal. So, when I think about the type of treatment that I want, I am not interested in a treatment that slows the cancer down. I want a treatment that will cure the cancer. I think that has shaped my research. All the treatments that I am developing now aim to eliminate cancers, not just slow them down or change their natural course.

What kinds of immunotherapies may be more potent?

Cell therapies, however, use the patient's own cells by manipulating them in the laboratory to increase their ability to target the tumor. Then we infuse the cells back to the patient. One type of cell therapy uses tumor-infiltrating lymphocytes (TILs) that we extract from the tumor, grow, and return those back to the patient. Cell-based therapies are experimental in solid tumors at this point, but I did the first clinical trial using TILs in non-melanoma solid tumors, which was important because we saw the first patients who appeared to be cured by cell therapy for a non-melanoma solid cancer. It shows that this type of approach can eliminate the cancer. It also seems like they can sometimes be effective where the checkpoint inhibitors have not worked. For example, I did a trial where four out of eight patients who had previously been unsuccessfully treated with checkpoint inhibitors responded to cell therapy.1 Now, I am focused on using T-cell therapies.

What’s the advantage of T-cell therapies?

Checkpoint inhibitors try to release the brakes on immune cells so they attack the tumor, but what if the patient doesn't actually have cells that have strong reactivity against the tumor? Even TILs rely on the patient naturally having cells that can target a tumor antigen. In T-cell therapies, the existing, ineffective T-cell response is replaced with a T-cell response that’s generated in the lab and then transferred into the patient. The T-cell response that you transfer is one that's going to be effective and kill the tumor with essentially a one-time procedure. Chimeric antigen receptor (CAR) T therapy, a commonly used cell therapy, genetically engineers a patient's peripheral blood T cells to target cancer. The types of therapy that I am most focused on right now are like CAR T therapy, but instead of using a CAR I use a T cell receptor (TCR). Unlike TIL therapy, engineered TCRs do not require surgery, and some of the most attractive tumor antigens can be targeted with a TCR but not with a CAR.

What is your approach to designing engineered TCR therapies for HPV-driven cancers?

I initially discovered T-cell receptors that target HPV antigens E6 and E7, which are great targets because they are expressed by tumor cells, but not healthy tissues. That means they can be targeted with impunity—with intent to kill every cell that expresses them—to cure the patient.

My initial clinical trial with an E6 receptor did not work as well as I had hoped,2 but then I discovered a better receptor that targets E7, and we recently reported the results of that that clinical trial.1 In a phase one trial, we saw responses in six of twelve patients, including four of eight patients who previously received PD-1- or PD-L1-based checkpoint inhibitors. There were really robust responses in patients with cancers that were refractory to other immunotherapies.

The responses in general were remarkable. In one case, we had a patient with almost 100 tumors and most of them completely went away. We learned a lot about why some tumors are responsive and others are not. It seems to be largely related to when the tumors lose the ability to show the target antigen to the T cells that are attacking the tumor, so this is likely to be a limitation not only for our engineered cell therapy approach with the E7 T cell receptor, but for other engineered cell therapy approaches too.

What therapy are you developing now?

Interestingly, one of the patients who received TIL therapy had metastatic cervical cancer and all of her cancer went away. She's now more than eight years out with no cancer, and it turned out that around two-thirds of the cells that we gave her targeted the exact same antigen through the exact same T cell receptor. It turns out the antigen that is targeted is called KK-LC-1 and it Is commonly expressed by gastric, lung, breast, and cervical cancers. We are gearing up to do a clinical trial targeting that antigen in those cancers using the exact T-cell receptor that we got from this patient who had a complete response to therapy. It is a real example of bench-to-bedside research, and how one patient participating in research can help other patients.