In CAR-T cell therapy, clinicians obtain T cell source material directly from a patient (autologous), or from a donor (allogeneic), modify them, and re-introduce them to the patient. Working with autologous cells can be complicated by insufficient source material quality or quantity, and expanding the cells to the requisite number takes time that the patient may not have. Allogeneic cells can be prepared in advance and mass produced, but they may be rejected by the patient, and in the worst case, begin attacking the patient’s own cells. 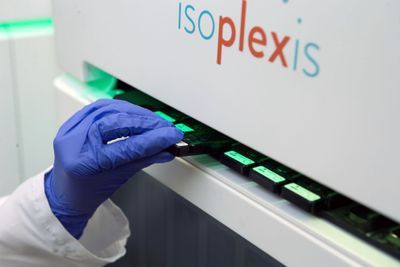 Senyukov’s goal is to learn what actually drives a cell to be polyfunctional – to produce multiple types of cytokines instead of a single cytokine – and to determine a way to apply that knowledge to improve CAR-T cell therapy in the future. Recent research found improved patient outcomes where polyfunctional T cells were present. For Senyukov, this indicates that genetic factors drive CAR-T cell heterogeneity, given that all the cells within a CAR-T product are ostensibly generated from the same starting material. But what is the relationship between these genetic factors and cytokine secretion profile? This is what Senyukov is trying to figure out with the help of single-cell functional proteomic approaches.

“My current project involves using IsoPlexis to profile the cytokine signatures of polyfunctional cells that we might have in a cell population,” said Senyukov. “Then we take those cells and employ a single cell RNA sequencing approach where we can also try to identify that polyfunctional cytokine signature in the RNAseq data. From there, we can try to identify what else—what other genes are associated with that signature—and then try to find the next genotype or other properties of a cell that makes them unique or different or better.”

Whenever cells have been altered in the laboratory—especially on a genetic level— researchers need to ensure that the edits function as intended. “To test CAR-T cells and figure out if they function properly,” Senyukov said, “you usually test them against their targets.” Researchers use three common metrics to evaluate T cell function and response: “When T cells are activated, they produce cytokines for the microenvironment and make it more pro-inflammatory. They [recruit] other cells and make the target cells more sensitive for killing, and that’s one of the first responses usually from T cells when they encounter a target. The second way that a T cell responds is by killing, so we can measure how effectively CAR-T cells kill the target cells. The third expected response is that T cells will proliferate—when T cells recognize an antigen, they will increase the population of T cells that are responsive to that antigen.”

Single-cell functional proteomics is valuable here as well, explained Senyukov. “When optimizing, or when changing manufacturing processes to make better cells, it can be used to monitor cellular changes. It is especially valuable in screening for polyfunctionality, which is key, because based on the literature, polyfunctionality is one of the most important factors driving clinical efficiency.”

Ultimately, Senyukov would like to break new ground for allogeneic CAR-T cells, given that most of the existing research on polyfunctional T cells comes from cases of autologous cell transfer. “There haven’t been too many studies on the importance of polyfunctionality for allogeneic material, and there’s a need to find specific signatures that could give us information about functional efficiency in a particular patient group. It’s also about trying to find other pathways of gene expression associated with polyfunctionality that could allow future optimization of manufacturing processes.”