Under the suggestive power of hypnosis, subjects can be convinced that they're feeling pain when no stimulus is given. Other subjects can be taught to control the amount of pain they feel, as with a dial. Appearing to work well in as many as 15% of people tested, hypnosis can tap into the brain's ability to produce and modulate pain as well as the maddening subjectivity of the experience. Using sophisticated brain imaging techniques in concert with the power of suggestion, scientists are getting closer to parsing the emotional and sensory aspects of pain.

"Studies with hypnosis are very elegant," says Northwestern University's Apkar Apkarian, noting that such studies were some of the first to separate different aspects of pain. Stuart Derbyshire, at the University of Pittsburgh, notes hypnosis' parlor-trick reputation: "People think they'll be clucking like a chicken." But serious study can be done under highly controlled circumstances. Hypnosis is about becoming highly focused on one thing and allowing that focus to be controlled externally, he says.

In Derbyshire's recent experiment,1 subjects were told that when tapped on the foot once, they would experience 30 seconds of heat pain; two taps to the foot indicated a 30-second period of rest. But some hypnotized subjects reported experiencing pain in absence of the noxious stimulus. Derbyshire considered such pain to be hypnotically induced. This hypnotically induced pain triggered brain activation very similar to that for actual heat pain. In the control case, subjects were asked to imagine pain without any noxious stimulus. Under this imaginary condition, pain was not experienced by most subjects and only fleetingly in two subjects; brain activation was absent in the areas usually associated with such pain.

Derbyshire, however, did not have a nonhypnotized control, suggesting that the increase in pain experience might have been due to the expectation of pain. But he still achieved his objectives, he contends – generating a pain experience without a stimulus. "We expected to use hypnosis to bring about that effect, but it really doesn't matter to us that much if it was not actually due to the hypnosis," he says.

Where Derbyshire created a pain experience without a stimulus, imaging and pain researcher Pierre Rainville typically employs a methodology that changes the experience of an actual stimulus. As part of an influential 1997 study,2 Rainville, an assistant professor of stomatology at the University of Montreal, had hypnotized subjects and told them to imagine a dial that they could turn up or down to affect the sensation of their hand, which was immersed in hot water. Positron emission tomography imaging studies showed that the modulation of the sensory area of the somatosensory cortex was proportional to the subjective modulation that the subjects were reporting.

In related experiments, Rainville and colleagues targeted the emotional aspect. They told subjects that they'd feel a burning, pricking sensation in their hand, but through suggestion convinced subjects that they were experiencing various levels of pain intensity. In fact, the sensation was the same in each case; only the external suggestion differed. At the end of each scan, subjects reported what trials were more or less unpleasant. Researchers found the corresponding modulation in the anterior cingulate cortex, the cortical part of the limbic system.

It's still unclear, however, whether hypnosis facilitates a widely applicable model for pain exploration. When Derbyshire talks about hypnosis at conferences, he still gets people saying "That's very interesting, but what's it got to do with the real world?" Roughly 15% of the population can be easily hypnotized such that their pain experience is altered. "The onus is on us to prove why that is," says Derbyshire. Rainville downplays the downsides, saying that only another 15% are not responsive, meaning 85% are somewhat to very responsive. Picturing a therapeutically relevant use for such methods, Rainville notes, "It's important to realize that even if someone might not be highly responsive, it doesn't mean they wouldn't get some benefit." 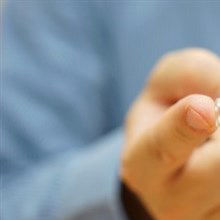