Anne Swanson can't think of a time when she wasn't fascinated by science. "I remember my father waking me up in the middle of the night in the winter and wrapping me in a blanket and hustling me out the door so I could see a dazzling display of the aurora borealis," she recalls. Later, a nurse piqued her interest in medicine by showing her a centrifuge and a microscope in the lab of the hospital where Swanson was receiving treatment for osteogenesis imperfecta. The condition, known popularly as "brittle bone disease," results in short stature and bone...

The biggest obstacle aspiring scientists with disabilities may face today, their older counterparts say, is the lack of public understanding of how capable they can be. "The awareness doesn't match the reality," says Swanson. "The reality is that we can do it, the awareness hasn't caught up."

Between 52 million and 58 million Americans, or roughly one person in five, has at least one disability, such as trouble walking, hearing or seeing, says Virginia Stern, who directs the American Association for the Advancement of Science's Project on Science, Technology and Disability. About half of people AAAS serves with its programs for people with disabilities, she adds, have a non-apparent disability. This means a disability that is not visible when meeting a person, and may include a chronic illness such as celiac sprue, a psychiatric condition such as bipolar disorder, or even a history of childhood cancer.

According to the National Science Foundation, 5.4% of employed doctorate holders working in the life sciences in 2001 were disabled. While NSF stats suggest that working science and engineering grads with disabilities make as much money as their peers, their statistics – as well as the sharp difference between the percentage of life scientists who are disabled and the percentage of disabled persons in the general population – suggest disabled scientists may have difficulty finding jobs. In 2001, 27% of science and engineering degree holders were out of work, versus 10% of S&E grads without disabilities.

Disabled doctoral degree recipients appear to form postgraduate plans that are roughly similar to those of their peers without disabilities, with 26% choosing academic employment, 17% choosing industry, and 38% planning postdoctorate study, compared to 22%, 22%, and 39%, respectively, for non-disabled individuals.

Just as there's a business and scientific case for building a workforce of individuals from diverse ethnic backgrounds, Stern says, hiring people with disabilities also makes good business and scientific sense. "This is part of our population, this is part of the customer base, and that is the same reason why companies are recruiting individuals of color and have been for the last 25 years...it's often a different point of view, a way of thinking outside the box, but it's also because the customer base is diverse."

'BORN TO BE A SCIENTIST'

Richard Mankin's family, for example, expected that he "would work in an office somewhere," he says. But he had other plans. "I was born to be a scientist so I couldn't do anything else – even if I hadn't immediately gotten a postdoc and got a job I would have kept going somehow," he says.

Mankin, now a research entomologist at the US Department of Agriculture, Agricultural Research Service, Center for Medical, Agricultural, and Veterinary Entomology in Gainesville, Fla., develops acoustical techniques to detect hidden insect infestations in trees, soil and even stored products. With a background in physics, Mankin entered the field by investigating acoustic communication among fruit flies. He realized some of the instruments he'd developed might be useful for detecting insects in soil, a realization that grew into a full-fledged scientific discipline.

Mankin uses crutches to get around, because he is missing several muscles in his legs and requires braces. Computers and the Internet have been hugely helpful, he says, as well as hand controls that allow him to drive, and he has two technicians who help him with fieldwork. "I do enjoy going out in the field and recording sounds from insects in the root systems of orange groves and things like that," he says. "It's not so terribly difficult, especially if you have other people around you who can assist."

SCIENCE IS A SUPERHUMAN EFFORT – FOR ANYONE

Given this increasingly competitive environment, Mankin notes, it's more important than ever for young scientists who are disabled and starting out to do what he did – figure out their unique strengths and create opportunities to use them. "Doing science nowadays is partly like a business, so you need not to be intimidated and you need to focus on something that you can do better than anyone else and lead off with that," he advises. "Once you're going, doing good science is key to doing everything else, and taking the time to do it. Certainly people shouldn't be intimidated by hard work, either."

Mankin, Swanson and others agree that in terms of physical obstacles, it has gotten much easier for scientists with disabilities to do their jobs. Thanks to the Americans with Disabilities Act (ADA) of 1973, signed into law in 1977, colleges, universities, labs, hospitals and any other places receiving government funding must make buildings accessible, and have to accommodate qualified students and workers with disabilities. Section 504 of the Rehabilitation Act, which became law in 1978, bars discrimination against people with disabilities by the federal government or any institution or agency receiving federal funds.

Getting practical work experience, starting early, is essential for anyone who wants a career in science. There are currently estimated to be 1 million people with disabilities studying in US colleges and universities. While laws like the ADA and Section 504 have meant more disabled people are entering higher education, accessing real-life work opportunities may prove more difficult. To address this problem, AAAS's Entry Point Program, which Stern founded in 1996, matches gifted undergraduate science and engineering students who have disabilities with summer research and work opportunities in industry and government. Sixty-seven students participated this summer. About half of students who participate in Entry Point go on to graduate school, and nearly all of them stay on in technical fields, according to Stern. "It's a very strong pipeline program."

Despite the view of many that industry leads academia in building an ethnically diverse workforce, business has generally been slower than academia to see disability as a part of diversity, Stern says. While President Clinton issued an executive order in 2000 requiring companies to hire 100,000 disabled people over the next five years, "it has yet to have much of an impact," the National Science Foundation's Office of Equal Opportunity Programs notes on its web site. And government isn't doing much better; 6.8% of the government's workforce is disabled, compared to 6.7% a decade ago, according to the NSF.

IBM has been a strong supporter of Entry Point since the program's inception, and Merck provided "very enthusiastic support" for the program this year, says Stern. "We're hoping that the experiences of IBM and Merck will encourage other companies to be proactive."

Melodi King, a junior at Arizona State University who has cerebral palsy, has completed two Entry Point fellowships. Two years ago, she worked on the formation of vesicles and their behavior under flow in the chemical engineering department at UC, Davis. Last summer, she worked in Merck's S&E department, doing ecotox analysis of some of the company's top selling compounds. This was more of a desk job, with a greater focus on social skills than physical capability.

The experiences showed King the wide variety of work opportunities out there in science, she says, and also forced her to live away from her family. She hopes to continue to build her confidence with more experience working in a lab. "Maybe I'll go to grad school! Who knows!" she says.

Learning about the wide variety of options out there for working in science, and finding the best fit, is key for any aspiring life scientist, says Swanson. "There are a couple thousand career paths, not one or two." 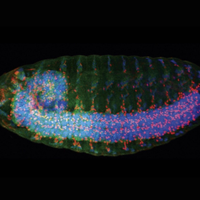