Just before the holidays, Kenneth Casey's young grand-daughter accidentally slammed the tip of her finger in a car door. Not surprisingly, she reacted quite strongly. Casey, a long-time pain researcher at the University of Michigan, had a look and saw there was little damage; he repeatedly reassured her that though it would hurt, she'd be OK. Very soon she calmed down. "It was amazing," says Casey of the change in her mood.

Pain encompasses multiple components – sensory, cognitive, and emotional. The intensity of one's pain experience stems not only from the inner workings of biological pathways, but also from one's emotional state, expectations, and previous experiences. From nociception to transmission, the brain is the ultimate interpreter and modulator of the pain experience.

Therefore, it's not surprising that researchers believed they'd found, in brain-imaging technologies, the ultimate tool to decipher the neural correlates of pain. Positron emission tomography in the 1980s, and later functional magnetic resonance imaging (fMRI) in the 1990s, promised to elucidate and greatly expand the intricacies of pain perception where electrophysiological recordings and lesion studies had fallen short.

Imaging has proved a boon for pain research, especially the easily accessible, noninvasive technology of fMRI. Nevertheless, the clinical models for pain have a limitation. Progress has been made in finding brain areas correlating to experimental pain experiences, which has provided hints about acute pain. Chronic pain has proven a greater challenge. It's not clear how informative experimental acute pain models – popular, laboratory-friendly paradigms that involve brief pain exposures – will be for real-world, everyday pain. Jon-Kar Zubieta, director of the psychiatry division at the University of Michigan's Depression Center, explains that there's a significant difference between acute pain, which is a warning signal, and sustained, prolonged, unrelenting pain, which becomes a stressor that can spur more complex reactions, like depression. But some have begun to seek new methods to account for the broader dimensions of the painful experience.

"There's definitely a well established pattern of brain activity specifically for acute, experimental, painful stimuli," says Northwestern University associate professor of physiology Apkar Apkarian, a pain and imaging researcher. "The pattern of activity for clinical pain conditions has been studied much less and has been studied much less specifically."

Researchers investigating acute pain employ a bevy of methods for inflicting harmless pain on subjects – everything from saline injections to hot plates to lasers to the extreme cold of ice baths to balloons inflated in the subject's esophagus. "There are a variety of torture techniques," quips Stuart Derbyshire, an assistant professor of anesthesiology at the University of Pittsburgh. Typically, the pain is inflicted via, say, a hot plate, and the brain is imaged to reveal areas potentially involved. The hope of such acute pain experience studies is to decipher which parts of the brain are responsible for different pain components.

Twenty years ago, the thalamus was commonly believed to be necessary and sufficient for the pain experience. Lesions of the thalamus, investigators had observed, sometimes produced spontaneous pain, whereas lesions of, say, the cerebral cortex, rarely seemed to affect pain perception. But with imaging, researchers discovered that other areas, including the anterior cingulate, the pre-frontal cortex, and the parietal cortex, also have roles. "That makes sense from the point of view of pain being a complex experience with an emotional component, a sensory component, cognitive components," says Derbyshire. Indeed, there is no actual "seat" of pain processing in the brain. Several areas are activated systematically, none of them alone being sufficient for painful experience.

According to Robert Coghill, an assistant professor of neurobiology at Wake Forest University, functional imaging studies can provide hints about dimensions of pain – such as intensity, location, and unpleasantness – that are likely processed by the same mechanisms involved in the processing of acute pain. "Having an acute, experimental model to explore a very poorly understood system is extremely helpful," he says.

A host of studies have tried to elucidate the subjective experience of pain and, potentially, clinically relevant pain networks in the process. One of several researchers investigating how expectations can change the experience of pain, Derbyshire recently used the increasingly popular technique of hypnosis to demonstrate significant brain changes in hypnotized subjects (see ). Each was told to expect pain from a hot plate when, in fact, none was presented.1 Five of eight subjects reported definite pain, even though they were not exposed to an actual hot stimulus. Those subjects had significant changes within the thalamus and anterior cingulate, insula, prefrontal, and parietal cortices.

Several studies have also attempted to identify brain areas for pain with no obvious physical locale, sometimes a feature of chronic pain. In one recent study, Catherine Bushnell, director of the center for research on pain at McGill University in Montreal and among the first to widely study pain with imaging techniques, compared cutaneous and visceral pain.2 Generally, when pain is simulated in visceral tissue, there's referred pain to some other skin or muscle. Visceral pain is not easily localized. When Bushnell inflated balloons in a subject's esophagus, the pain presented as an aching muscle in the chest or back. When she applied an equivalently intense amount of pain to the chest, she got the same overall pattern of activation at the secondary somatosensory and parietal cortices, thalamus, basal ganglia, and cerebellum. But she saw differences at the insular, primary somatosensory, motor, and prefrontal cortices, suggesting somewhat different brain correlates for cutaneous versus visceral pain experiences.

Despite such progress, the neural correlates of chronic pain remain elusive – although studies have begun to target the topic. The physiological underpinnings of disorders like chronic low back pain and fibromyalgia syndrome, a musculoskeletal pain and fatigue disorder, still present a challenge for researchers and physicians.

Hoping to show not simply the acute, but the long-term physiological and cognitive effects of pain, Apkarian's group compared the brains of 26 chronic back-pain patients with those of 26 age-and sex-matched normal subjects.3 They found regional decreases in brain gray matter mass and density that correlated to the pain duration. The longer the pain persisted, the more the brain atrophied – specifically in the lateral prefrontal cortex and the thalamus. Apkarian examined these regions over time and with multiple modalities – fMRI, MR spectrometry, which details brain chemistry, and MR morphology, to observe morphological changes. "Our running hypothesis is that suffering with the pain is impacting the brain itself," says Apkarian. "It's making neurons dysfunctional, specifically in brain areas that are most involved in suffering with the pain, coping with the pain." But the cause and effect between the pain experience and the morphological changes have not been proven, nor have the potential confounding effects of genetic predispositions.

Other recent data about pain transmission at the molecular level reveal further the complexities of pain regulation. Zubieta has done work suggesting that individuals differ in their endogenous neurotransmitter responses to pain, observations that may help explain not only clinical pain, but also the different pain experiences in men versus women.

In a 2001 study, Zubieta examined the effects of endogenous, pain-suppressing opioid peptides, which interact in particular with the μ-opioid receptor and hence modulate the pain experience.4 Employing a pain technique that's been around for 20 years, Zubieta's group injected a 5% saline solution into the jaw muscles of subjects (much higher than the typical 0.9% solution used to rehydrate); then, over a period of 20 minutes, they asked subjects to rate the pain experience. Based on that rating, computers sustained the pain by modulating the saline infusion rate – it's a method that more closely mimics a chronically painful state than those methods employing acute stimuli, says Zubieta. Subjects were scanned with and without pain. An opioid receptor marker, ingested by subjects, revealed the density of opioid receptors in each case. Zubieta discovered, to his surprise, that several brain regions were releasing endogenous opioid peptides.

He also observed the high degree of inter-individual variability. In follow-up studies, Zubieta showed that hormonal differences played a major role. Women with low estrogen and progesterone levels released fewer endogenous peptides and therefore could tolerate less pain than men. Increase the estrogen and progesterone levels, and their pain tolerance increases. "The bottom line, women are more complex in the way they modulate the pain through these mechanisms," says Zubieta.

Such studies, says Zubieta, are more illustrative than acute pain challenges. "Acute pain studies are telling us about a different kind of condition," says Zubieta. "It's not that it's not relevant; it's just different." 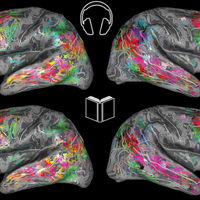