At the Society for Amateur Scientists meeting in Philadelphia, June 28-30, amateur microscopist Ely Silk demonstrated a low-cost solution that could bring fluorescence microscopy to laboratories and classrooms that could never have afforded the technology before. Capable of being used with virtually any microscope, the basic apparatus can be assembled from inexpensive components by anyone able to use a soldering iron.

Fluorescence microscopy exposes a specimen to a specific wavelength of light, causing artificial dyes or naturally occurring molecules to fluoresce. Traditionally, the desired wavelengths are produced by a high-intensity mercury-vapor lamp, in combination with various filters. This system requires an expensive power supply, and the pricey and delicate lamp bulbs generally last less than 300 hours. Worse, mercury-vapor lamps sometimes explode without notice, releasing toxic vapors into the laboratory.

Silk, from Fort Lauderdale, Fla., says he was "really unhappy with the mercury lamp" in his home laboratory. Inspired by one of the ultrabright light-emitting diodes (LEDs) now available in electronics stores, Silk "looked at the spectral output of the LED and it looked fairly narrow, so I set it up with some lenses and said 'yes, this is going to work.' As a result, I now use it whenever I can." High-intensity LEDs are available in a wide range of spectral outputs, so Silk can obtain most of the wavelengths used in standard fluorescence microscopy.

The inexpensive LEDs can be fed with a cheap power supply or even batteries, and generally have a useful lifespan in excess of 30,000 hours, after which they quietly and harmlessly fade out. Silk cautions, however, that "one of the big tradeoffs is [that the LED] is much less intense than a mercury-vapor lamp," so very faintly fluorescing samples may be difficult to see. Still, it's hard to beat the price: "For $150, a classroom could do some nice work with it," says Silk, adding that dimmer images can be intensified and projected on a monitor with low-cost CCD cameras.

The low price and flexible power supply could also be useful to developing countries. Oliver Turner, a tuberculosis researcher at Colorado State University, explains: "Fluorescence microscopy is a wonderful tool and has potential for use in many medical analyses; however, cost ... is always a problem, especially in cash-strapped countries. If a way to reduce costs was found, it would certainly be of use from a public health standpoint." 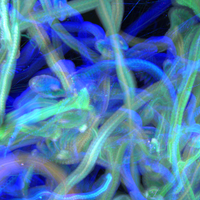 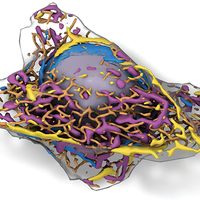