The immune system is often likened to the military. The body's army has weapons such as antibodies and complement, and soldiers such as macrophage and natural T cells. The immune system also sports an impressive communications infrastructure, in the form of intercellular protein messengers called cytokines and the cellular receptors that recognize them.

The cytokine family consists of such soluble growth factors as the interleukins, interferons, and tumor necrosis factors, among others. Once the specialized province of immunologists, these proteins are now appreciated for the roles they play in conditions as diverse as atherosclerosis and herpes zoster, and their measurement has become an integral part of both clinical diagnostics and biomedical research....

The classic method of detecting and quantifying RNA is the northern blot, in which RNA is separated electrophoretically, transferred (blotted) to a positive-charged membrane, and probed with labeled oligonucleotides (either RNA or single-stranded DNA). Probes complementary to species on the blot will hybridize, while those not matching bound RNA will be washed away. The captured probes are then detected by radiography, chemiluminescence, or fluorescence, depending upon how the probe was labeled.

Though effective, northern blotting is laborious, reagent-intensive, and can analyze only one gene at a time. More and more researchers are thus moving to other, higher-throughput approaches. DNA arrays, for instance, permit scrutiny of hundreds or thousands of genes simultaneously using relatively little RNA sample. A Japanese firm, Takara Bio, manufactures glass slide-based cytokine microarrays such as the IntelliGene Human Cytokine CHIP, which bears nearly 550 cytokine-related cDNA fragments.

Other companies develop cytokine macroarrays. Like microarrays, macroarrays probe expression of many genes, but instead of using a glass or plastic substrate, they are printed on large nylon membranes and thus require no special equipment. When combined with colorimetric detection, "You can view them by eye if you want to," says Xiao Zeng, director of business and product development at Superarray Bioscience of Frederick, Md. "You don't need a microscope or a scanner," Zeng adds, though many researchers do use aids such as these and phosphor imagers for greater accuracy.

Arrays and northern blots occupy opposite ends of the throughput spectrum. Northern blots test a few RNA samples (perhaps 10 to 20) for the expression of a single gene, whereas arrays test a single sample for hundreds or thousands of genes. Scientists interested in measuring the RNA of a few cytokines in many samples simultaneously may want to consider multiplex PCR (MPCR), a technique whose sample throughput is limited only by thermocycler capacity.

"If you're comfortable running PCR and comparing the results by gel, you can do six to eight genes in one sample, without advanced equipment," says Geoffrey Routh, technical service scientist at Biosource International, a Camarillo, Calif.-based company that supplies a range of cytokine detection products.

Several suppliers offer MPCR kits that contain reagents optimized to work together to simultaneously amplify multiple cytokine sequences in a single tube. "The PCR primers have similar Tm's [melting temperatures] and no obvious 3'-end overlap to enhance amplification of multiple targets," claims Biosource's messageScreen literature. If the cDNA isn't required for other experiments, reverse transcription and PCR can be done as a one-step reaction in a single tube.

Most manufacturers engineer their primers to recognize cDNA sequences that span an intron splice boundary, so that contaminating genomic DNA (if present) will not be amplified. Amplicons are designed to be of sufficiently different sizes so as to be distinguishable by standard agarose gel electrophoresis. But results can also be imaged via other means such as fluorescence or radiolabeling.

MPCR is considered "semiquantitative," explains Routh. "Detecting a twofold difference may be difficult; 10-fold is much more likely." That's because the technique relies on a reaction that essentially goes to completion. Routh calls it "endpoint PCR."

Real-time PCR, in contrast, catches the reaction in its logarithmic phase, when the amount of product generated is proportional to the amount of template in the original sample. The technique uses specialized tags that fluoresce as they are incorporated into the amplicons; fluorescence is assayed as the reaction proceeds, using dedicated thermocycler-detectors such as the ABI PRISM Sequence Detection systems from Applied Biosystems, Foster City, Calif.

Real-time PCR is probably the most widely used technique for measuring message these days, says Whiteside. Reagents can readily be found, or easily synthesized from published sequences. "It used to be that we begged other investigators to give us probes for certain cytokines," she says. "Today, they're widely commercially available for most cytokines and chemokines."

Because real-time PCR uses distinct fluorescent tags rather than size to distinguish one amplicon from another, the technique "can't really amplify more than two or three genes at a time," says Routh.

Ribonuclease protection assays (RPA), on the other hand, can examine a dozen or so genes simultaneously. In RPA, labeled RNA probes are hybridized with sample RNA. Digestion of the sample with ribonuclease destroys unhybridized RNA while leaving, or "protecting," hybridized fragments that can be resolved electrophoretically.

At least two manufacturers offer systems to detect cytokine RNA in ELISA-like assays. In Minneapolis-based R&D Systems' Quantikine mRNA kits, RNA is mixed with two oligonucleotides, one biotin-labeled probe and one digoxygenin (DIG)-labeled probe. The solution is transferred to a streptavidin-coated plate, where the RNA is visualized using an anti-DIG-alkaline phosphatase conjugate to catalyze an enzymatic reaction. Color is generated in proportion to the amount of specific RNA in the starting material, and it can be read in any standard ELISA reader. Probe kits are designed to query multiple samples for the presence of a single cytokine message species.

Fremont, Calif.-based Genospectra's QuantiGene Reagent System Screen Kit can also quantify a single RNA species directly from cell lysates or tissue homogenates. Cytokine-specific oligonucleotide probes bound to the wells of a 96-well plate capture the RNA. A second set of oligonucleotide probes then hybridizes to another sequence on the bound RNA. The probes are in turn recognized by "branched DNA" conjugated to alkaline phosphatase, which catalyzes a chemiluminescent reaction that is read using a luminometer.

Genospectra recently introduced a multiplex version of this technology, called QuantiGene Plex, in which the primary probes are bound to fluorescent Luminex beads rather than a microtiter plate. The system, which also replaces the standard kit's chemiluminescence detection with fluorescence detection, can probe up to 10 mRNAs at once. The beads are run through a Luminex instrument (from Luminex of Austin, Texas), which simultaneously reads the beads' internal fluorescence (indicating which transcripts were captured) and that of the tags (reporting how much was captured).

Finally, some researchers measure cytokine gene expression using in situ hybridization (ISH), a histologic technique in which tissue sections are incubated with labeled oligonucleotides to probe for the presence of complementary sequences. ISH's primary advantage is that, unlike the other techniques discussed here, it can identify the cells that actually produce a particular transcript. But like northern blotting, ISH is low-throughput, testing a single slide for a small number of genes.

Naturally, many researchers don't limit themselves to just one of these techniques, as each has its advantages and disadvantages. But if you do choose to study cytokine gene expression, Whiteside offers this useful caveat: "The presence of mRNA for a cytokine in tissue is meaningful, but its absence is not, as cytokine transcripts are short-lived, and their absence in the tested tissue could reflect rapid processing or degradation rather than the lack of synthesis."1 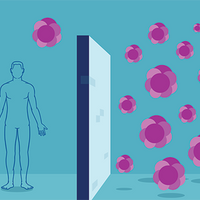