Anyone who has been subject to a magnetic resonance imaging (MRI) scan knows its limitations: the claustrophobia-inducing tunnel, the machine gun rattle, the instruction not to move – none of which is conducive to relaxation. For confused patients and newborn babies, MRI scans are not possible, and researchers who study movement or hearing are severely restricted in what they can test. Now, an alternative noninvasive brain-imaging technique called optical topography (OT) is illuminating areas of brain function previously considered inaccessible and exploding some myths about...

The science behind OT dates back to the late 1970s, when F.F. Jobsis of Duke University published a method for monitoring oxygen consumption in living tissue.1 Called near-infrared (NIR) spectroscopy, the technique depends on the transparency of tissue to light in the near-infrared range. Photons of NIR light traveling through tissue can be detected as they emerge – the same effect people see when they hold a hand up to a candle flame. Since the two conformational forms of hemoglobin absorb light at different wavelengths, Jobsis could deduce from the two signals the average oxygen consumption across a cat's head.

At University College London, Dave Delpy quickly saw the value of Jobsis' technique for his research. Delpy was studying the brains of premature and brain-damaged infants, which have roughly the same diameter as that of a cat. His team built an instrument consisting of one light-transmitting fiber and one receiving fiber that could detect abnormalities in oxygen consumption in neonate brains. A Japanese firm, Hamamatsu Photonics, later developed the instrument.

For anything larger than an infant's head, though, the technique didn't work, because too much light was absorbed by the scalp, skull, and brain. So several groups hit on the idea of having multiple transmitter-receiver optode or optical fiber pairs across the scalp, and measuring the light reflected back out of the brain at each location, rather than the light passing through it.

Britton Chance at the University of Pennsylvania was one of the first to show that enough light was reflected to produce a signal representing localized oxygen consumption in the cortex.2 After that it became a question of constructing arrays of transmitter-receptor pairs that could cover the whole scalp, each one generating an image of oxygen consumption at that site. Thus, in 1995 OT as a brain-imaging tool was born.

Several companies now produce OT instruments worldwide. At Hitachi, Hideaki Koizumi has been in charge of OT development since 1987. His team independently came up with the idea of simultaneous recording from different optode pairs. But clinicians were initially skeptical of the device.

"Neurosurgeons did not believe that near-infrared light could pass through the thick human skull," says Koizumi. So in collaboration with Eiju Watanabe, a neurosurgeon at the Tokyo Metropolitan Police Hospital, they set out to measure the light transmittance of the human skull. "We found that 0.1 percent of light could pass through," says Koizumi. "It was enough to obtain a good signal-to-noise ratio and rapid observations."

Hitachi's standard OT instrument sports 24 transmitter-receiver pairs or channels, and the most advanced model to date has 120 channels. Over the years the company's scientists have refined the wavelengths of the transmitted light to the peak absorption wavelengths of hemoglobin in its two forms: 690 nm for deoxygenated hemoglobin and 830 nm for its oxygenated counterpart. The equipment consists of a foam-lined, optode-studded helmet that is both light and easy to wear. Patients are thus mobile while they are wearing it. Moreover, recordings can be made over extended periods of time: Delpy has recorded continuously in babies over a full 24 hours.

OT does have a lower spatial resolution than fMRI, at least at standard magnetic field strengths of 1.5 or 3 tesla, but it is also faster. Whereas fMRI can detect changes occurring within only a second of each other, the temporal resolution of OT is in the millisecond range. That makes OT ideal for neurosurgeons, who tend not to need a great deal of spatial detail, but for whom near-real-time images are invaluable. Japanese doctors, at least, have embraced the technique.

Watanabe says OT is now in routine clinical use in Japan, mostly by neurosurgeons who wish to accurately identify the focus of epileptic seizures, and the cerebral hemisphere dominant for language before they surgically remove epileptogenic tissue. If the focus of the seizures turns out to be in the language-dominant hemisphere, then the surgeon must weigh the advantages to the patient of eliminating the seizures, against the disadvantages of any potential language impairment surgery may cause.

"OT is easy to use," says Watanabe. "It takes only 10 minutes to complete the exam, compared to at least one hour if we use fMRI or PET [positron emission tomography] to determine language dominance." With fMRI, because of the difficulty of coinciding a scan with a seizure, it is almost impossible to image the seizure as it happens. But as the OT helmet can be worn for long periods of time without restricting mobility, real-time imaging of seizures becomes feasible.

In contrast to neurosurgeons, researchers who are interested in mapping brain function have a critical need for good spatial resolution. OT and fMRI both measure deoxyhemoglobin, making it possible to directly compare the level of spatial detail the two methods show.

Last year Silvina Horovitz of Yale University and John Gore of Vanderbilt University used OT to scan the brains of human subjects performing a reading task. At some point during the task, the subjects were presented with an anomalous phrase such as "heard shirts." When the researchers compared their responses to this anomaly as measured by OT with fMRI data on the same task, they found good agreement between the two. "We wanted to see whether we could see differences in localization of activation between a regular reading task and a particular semantic anomaly," says Horovitz, "And we did find that with OT we were able to distinguish a slight shift in these activations."3

While the spatial resolution of OT may be good enough for most research purposes, it does have one major scientific limitation: In contrast to fMRI, which can generate a full three-dimensional image of the brain including all its subcortical structures, OT doesn't penetrate the brain more than a few centimeters. Light scatters on entering living tissue, with a small proportion being reflected back to the detector at the surface. A probabilistic map of the scattering shows that the reflected light generally follows the path of a shallow, banana-shaped curve. The depth of that curve, about 2 cm at its thickest point, is as far as one can see into the brain with OT.

Fortunately for OT proponents, that depth corresponds roughly to the thickness of the cortex, which Delpy says is sufficient for most researchers. "Almost all the grey matter is in that outer cortex anyhow," he says. At least some researchers agree. Jacques Mehler of the International School for Advanced Studies in Trieste, Italy, purchased his first Hitachi instrument six years ago. He persevered with it despite early technical problems and published one of the first brain-imaging studies in neonates in 2003.4

For 30 years Mehler has been studying how infants acquire language. Never trusting behavioral measures alone, he was always searching for physiological indicators to corroborate them, from heart rate and measures of respiration to noninvasive brain imaging. But he was wary of fMRI.

"fMRI is so noisy, using it for speech research is particularly difficult," he says. "Besides, I'm not sure that putting a neonate in such a noisy environment is ." OT seemed to him less invasive, and therefore a more promising tool for his purposes. With Marcela Pena, Maki, and others, he has used OT to demonstrate that even at birth, infant brains are able to process speech differently from other sounds, with a bias towards the left hemisphere, as exists in most adults.

PUSHING OT TO THE LIMITS

At the University of Tokyo, Gentaro Taga uses OT in his work on developmental plasticity. In an as-yet-unpublished study, Taga and his colleagues scanned the brains of sleeping infants between two and nine months of age, to see how they responded to speech. The team found that speech activated not only the auditory area in the left temporal cortex, as might be expected, but also areas in the right temporal cortex and the occipital cortex, which is more usually associated with vision.

Taga wants to replicate his findings before he draws any firm conclusions, but if they turn out to be robust, he says they could provide evidence for the breadth of sensory connections that exists in a baby's brain, before synaptic pruning and programmed cell death divide it up neatly according to sensory modality. He also thinks a disruption or delay in this developmental pruning process could lead to synesthesia, the sensory cross-wiring that causes people to see flashing lights when they hear sounds, for instance.

At the very least, his findings raise intriguing questions about the nature of a baby's sensory experience. "Although there is no direct evidence that infants are synesthetes, many behavioral studies have shown that infants have some ability for cross-modal transfer of perception," says Taga.

Meanwhile, Butterworth has co-opted OT to his long-term study of the development of mathematical ability, and what goes wrong in the brains of those who are dyscalculic, or unable to calculate. "The plan is to do something that is really very hard to do with fMRI, and that is to look at the development of the function of a particular brain area," he says.

His investigation will push OT to its limits. Butterworth's team has already conducted fMRI studies that implicate the parietal lobe, towards the back of the brain, in numerical processing. A deep groove or fissure (the intraparietal sulcus) in that lobe appears to be particularly important for number crunching. It is by no means clear, however, that OT will be able to penetrate that fissure, though Delpy says the laser transmitters can be angled to guide the light along a cortical groove.

Butterworth's plan also demands the detection of subtle changes in brain activation as development proceeds. At the moment, there is no reliable method for analyzing OT images and determining whether increases in blood flow are statistically significant or not. So his team is collaborating with Delpy and others to adapt Statistical Parametric Mapping (SPM), a modeling package developed for fMRI, for the analysis of OT images.

Even more ambitious plans are in the works. Maki thinks OT could provide a crude means of communicating with patients who have locked-in syndrome, by training them first to alter their brain responses to simple yes-no questions. Koizumi is launching a large child-cohort study involving 10,000 Japanese children, to look at the roots of antisocial behavior using OT. Delpy, meanwhile, has gone back to building full 3-D images of infant brains from transmitted light. This technique, called optical tomography, was once abandoned, but he now considers it viable, thanks to rapid technological advances.

In any event, fMRI proponents needn't worry that OT will crowd them out. "The two techniques are totally complementary; one doesn't replace the other," says Delpy. "MRI gives you high spatial resolution, and OT high temporal resolution. You can then map one onto the other to produce a great combined image." 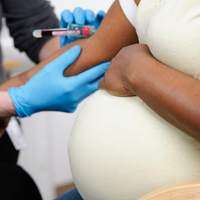