More often than not, when a researcher needs to genotype samples for a particular single nucleotide polymorphism (SNP), or to measure the expression of a specific gene, they end up having to design the reagents for themselves. This involves identifying and validating optimal sequences, designing probes, and getting an assay system set up and running. Foster City, Calif.-based Applied Biosystems (ABI) aims to let scientists focus on their research, instead of on experimental design, with its new Assays-on-Demand™ product line.

A simple search engine on the company's Web site gives scientists access to a genome-wide selection of over 85,000 ready-to-use assays for SNP genotyping and 7,000 for quantitative gene expression. The product line will be incrementally increased every few weeks, raising the total to 30,000 gene expression assays and 200,000 SNP genotyping assays by the end of the year. The sequences derive from both public and private human genome sequencing efforts; users can search assays by gene name, symbol, SNP location, or by public and Celera accession number.

Scientists use the assays in conjunction with ABI's TaqMan system, which measures PCR product accumulation using a dual-labeled fluorogenic oligonucleotide probe. The TaqMan probe consists of a short oligodeoxynucleotide of 20 to 25 bases labeled with a fluorescent reporter on the 5' terminus and a quencher on the 3' terminus. Amplification of the probe-target sequence results in probe cleavage and increased reporter fluorescence. From PCR to detection, the entire process takes just over an hour.

The SNP assays are preformulated with the four required oligonucleotides and are validated against 90 individual DNA samples from two populations, relieving scientists of the burden of having to design, formulate, and test the assays for themselves. "The customer can add TaqMan Universal Master Mix, add their DNA, and go." Says Dennis Gilbert ABI's vice president of genomics.

For multiple SNPs, Gilbert points out that Assays-on-Demand was designed to keep the price per genotype relatively low, eschewing the need to multiplex. "We've provided a low cost per genotype with a very simple workflow, so one SNP per tube works just as well." Each assay's price is based on volume, not on it's perceived importance. Gene expression assays cost $150 (US) for 250 five-microliter reactions; SNP genotyping assays cost $210 for 750 five-microliter reactions.

According to Gilbert, the product line enables scientists to proceed with studies that would otherwise await the development of these resources. "The scope and breadth of this is very exciting," he says. "Whatever question you want to ask, the answer is out there." 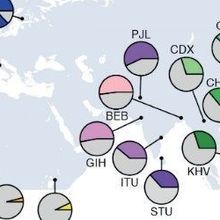