When the human papillomavirus enters a cervix, it doesn’t lyse cells or cause inflammation. While some strains can cause genital warts, in most cases the body clears the virus without much fuss. But “in an unfortunate number of people, the virus gets stuck,” says Nigel McMillan, a cancer researcher at Griffith University in Queensland, Australia. Even 15 or 20 years after infection with certain human pap-illomavirus (HPV) strains, cervical and other cancers can develop as a result. 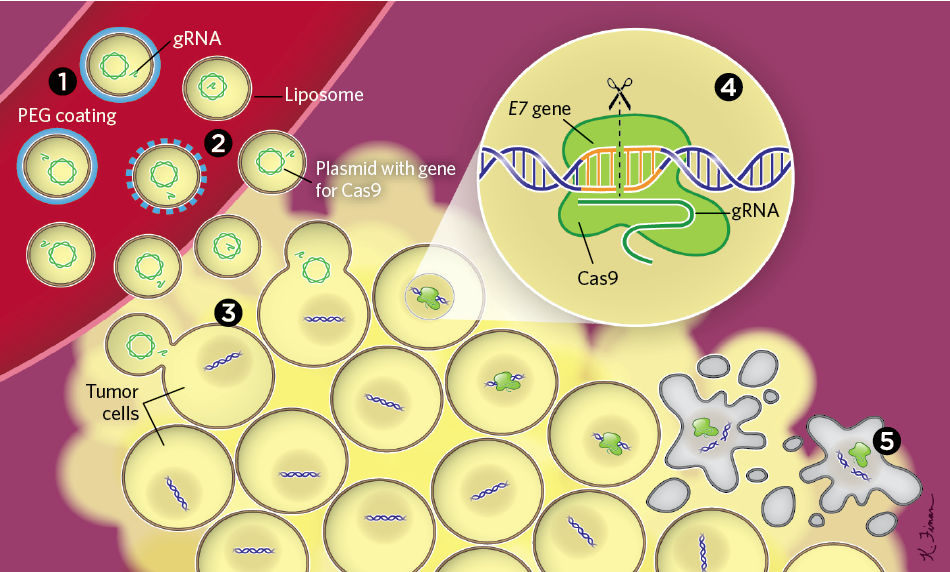 CUT OFF: Special stealth liposomes with a polyethylene glycol (PEG) coating that serves to hide the liposomes from the immune system are injected into mice with tumors (1). There, the PEG covering spontaneously falls off (2), allowing the liposomes to merge with cells and deliver CRISPR-Cas9 gene editing machinery (3). The system is designed to slice the powerful oncogene E7 (4), triggering apoptosis (5) and wiping out the tumors. WEB | PDF
KELLY FINAN

Looking for a new way to treat these cancers, McMillan focused on two oncogenes, E6 and E7, that HPV delivers to host cells. If E6 and E7 are turned off, cancer cells will not survive—a phenomenon known as oncogene addiction. In the early 2000s, McMillan and others used short interfering RNAs (siRNAs) to reduce levels of the mRNA products of these two oncogenes. This treatment killed cancer cells in vitro, but there was no effective and commercially available way to get the siRNA to tumors in a live animal.

So in 2009, McMillan and his colleagues began working with something called stealth liposomes. Unlike regular liposomes, which are spherical phospholipid containers that researchers can use to deliver drugs into cells but which are often targeted by the immune system to be removed from the body, these liposomes are coated with a polyethylene glycol (PEG) layer that’s nontoxic and non-immunogenic. In a mouse model that had been injected with cancer cells, tumors shrank considerably when the animals were treated with siRNA-loaded stealth liposomes. But the tumors never completely disappeared.

In 2013, CRISPR-Cas9 gene editing burst onto the scientific scene, and by 2016 McMillan decided to try deploying it against the HPV oncogenes. With CRISPR, “we were actually attacking the very gene, the absolute primary cause of this cancer,” rather than its products, as siRNAs did, says McMillan. His team made guide RNAs targeting the E7 gene and put them into PEGylated liposomes along with the other components needed for CRISPR-Cas9 editing. They then injected the liposomes into the bloodstreams of mice with tumors.

The PEG coating falls off within 24 hours of injection, allowing the liposome to merge with tumor cells and release the CRISPR-Cas9 system, shutting down E7. McMillan and graduate student Luqman Jubair gave some of the mice three injections, which caused the tumors’ growth to slow, but still, it didn’t stop. In a separate group of mice given seven injections, the tumors disappeared altogether. “It was like, ‘Holy moly! This is amazing,’” says McMillan. “We kept being amazed each time we did a measurement.”

McMillan says the study is the first example he knows of wiping out cancer in vivo using CRISPR. Edward Stadtmauer, a clinical oncologist and researcher at the University of Pennsylvania who was not involved in this study but recently demonstrated the safe use of CRISPR-edited cells in cancer patients, writes in an email that the work is “certainly innovative” and demonstrates “really interesting delivery of CRISPR technology to tumors in a mouse model.”

McMillan hopes to launch a clinical trial of liposomes delivered via a patch placed on the cervix, rather than intravenously, in the next couple of years, working with Kevin Morris, a gene therapy researcher at City of Hope Hospital in California who wasn’t involved in the current study. “It’s the whole package,” Morris says of McMillan’s study. “He’s shown here that you can obliterate the cancer itself.” 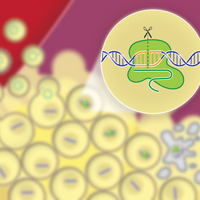 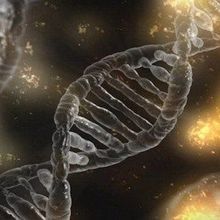