Animals eat plants. Animals poop. Poop nourishes plants. It may sound simple, but it’s not. Elizabeth le Roux, an ecologist and Newton International Fellow at the University of Oxford, studies this complex cycle in the South African savanna, particularly as it relates to larger animals and how they differ from small species in their effects on ecosystems.

As a graduate student at Nelson Mandela University in South Africa, le Roux began investigating how animal dung varies across the grassy plains of Hluhluwe-iMfolozi Park and whether that variation influences the local plant life. At 15 sites, she and her colleagues assessed the density of the vegetation, used camera traps to record how many of each animal species frequented a particular area and how long they stayed, surveyed the amount of dung and noted what species it came from, and sampled dung, soil, and plants to assess nitrogen and phosphorus levels. 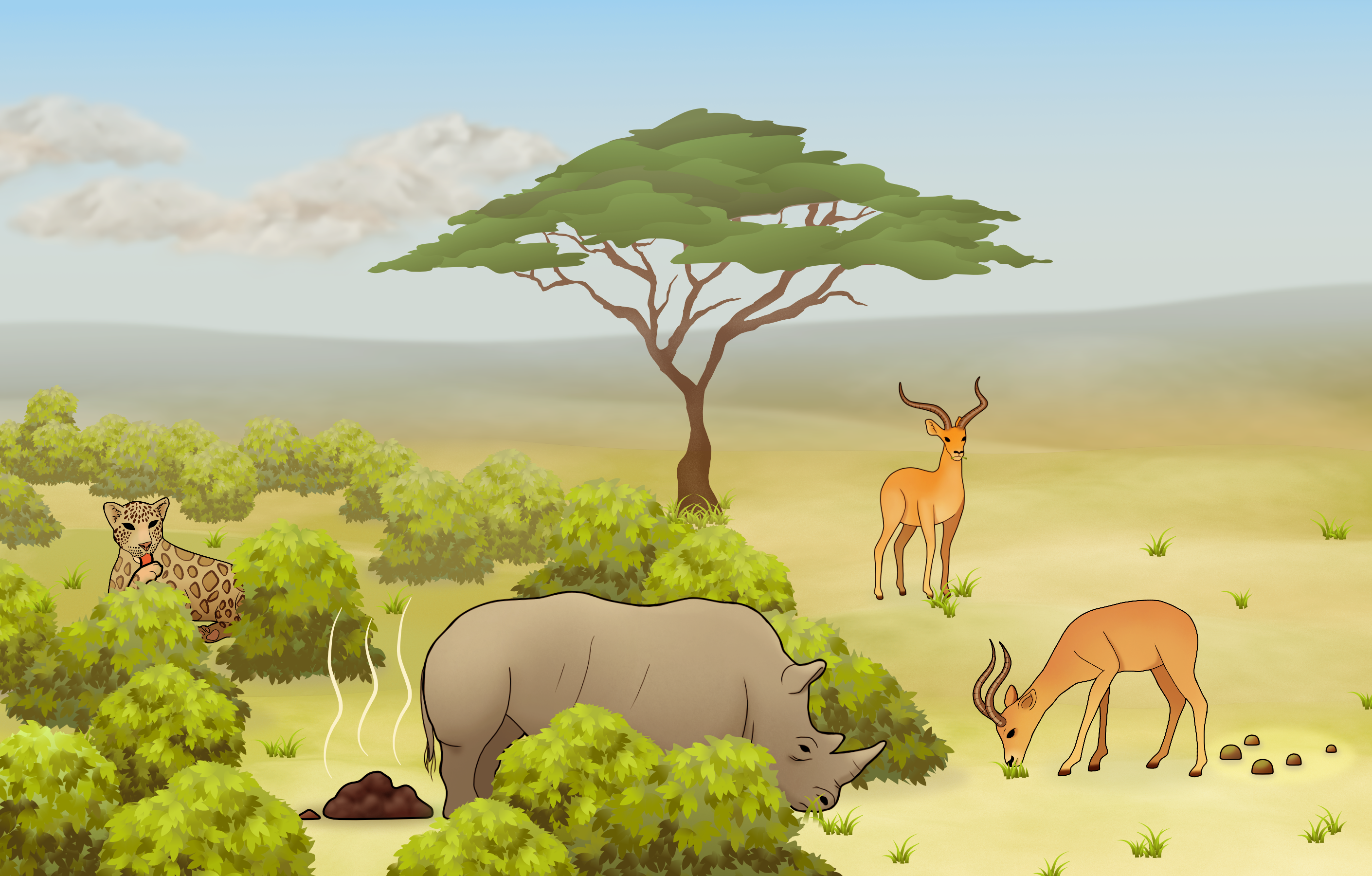 BIG DUNG: Areas with denser vegetation and thus lower visibility (left) are more likely to be frequented by larger animals—which have less to fear from predators—than by smaller animals, according to a recent study. Compared with smaller herbivores such as impala, large herbivores such as elephants and rhinos produce dung with relatively lower phosphorus content. These differences in dung are associated with variable availability of nutrients for plants growing in the savanna, the researchers found, suggesting that the animals’ body sizes could influence ecosystem functioning. WEB | PDF
© Melanie Lee

The team hypothesized that vegetation-dense, low-visibility areas would be frequented by large animals, which are less likely to be targets for lions and other predators that sneak up in the foliage. Indeed, camera traps showed that smaller grazers such as impala stick mainly to open areas, while elephants and rhinos often graze at denser sites.

The researchers also analyzed the grasses at their sites to see if dung nutrient differences were reflected in plant tissue. Here, the data hinted that phosphorus:nitrogen ratios may be lower in grasses in vegetation-dense areas frequented by large herbivores, but the effect was weak. That’s not surprising, le Roux says, as plant nutrient ratios are influenced by factors other than dung, such as soil microbes and fire.

Ecologist Harry Olde Venterink of Vrije Universiteit Brussel praises the study for its innovative use of camera traps to collect quantitative data on animal behavior, and says it provides good evidence that larger animals are using sites differently than smaller ones and may be influencing nutrient availability via their dung. His team recently showed that herbivore dung quality in Europe influences plant community diversity (Sci Rep, 9:5675, 2019), and he says the new study is a further step toward deciphering how animals influence nutrient cycles.

Le Roux says the findings could help researchers understand the effects of adding or removing larger species from ecosystems. As humans influence wild animal populations, often “we’re changing the average [body] size of the herbivore community,” she says. “We need to understand: What are the consequences?”