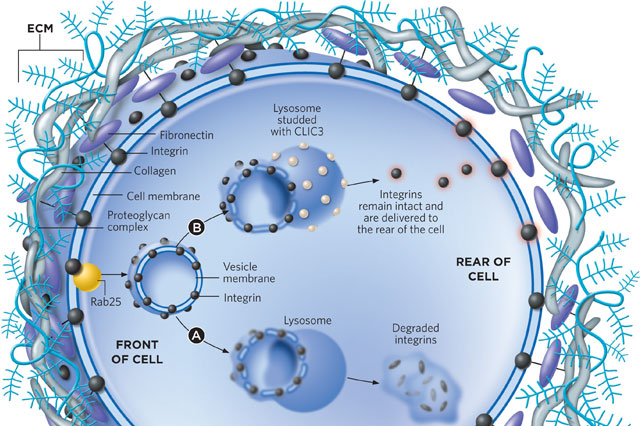 INTEGRIN TRAP: Rab25 proteins bind integrins in the cell membrane and shuttle them to lysosomes. If the Rab25 shuttles the integrins to a lysosome where CLIC3 is absent, then they are degraded (A). If CLIC3 is present on the surface of the lysosome, the integrins survive and are shuttled to the rear of the cell where they help the cell detach from the extracellular matrix (ECM) and become metastatic (B). PRECISION GRAPHICS

Rab25 has perplexed cancer researchers for years. The small membrane-trafficking enzyme sometimes appears to drive cancer and at other times to protect against it: it is associated with aggression in breast and ovarian cancer and with suppression of intestinal tumors. Intrigued by this contradiction, Jim Norman and colleagues at the Beatson Institute for Cancer Research in Glasgow screened Rab25-expressing cells for additional proteins that might be involved in its function.

The Rab25 proteins, the team found, bind integrins in the plasma membrane at the front of a migrating cell and direct them to lysosomes, the cell’s digestive wastebaskets. There, at the lysosome, the integrins face one of two fates: in the absence of CLIC3, integrins are destroyed in the lysosome; but when CLIC3 is present on the lysosomal membrane, they depart the lysosome intact. “That was a surprise,” says Norman. “It’s like being dipped into the fires of hell and coming out unscathed.”

The researchers were also surprised to find that when a Rab25-bound integrin leaves the lysosome thanks to CLIC3’s presence, it is transported to the rear of the cell. “It’s very provocative,” says Guido Serini, who studies cell adhesion at the University of Torino School of Medicine in Italy and was not involved in the study. “This is something no one could have predicted, because we are usually associating active integrins with the movement that occurs at the leading edge of a migrating cell.” Instead, the integrins shuttled rearward by Rab25 and CLIC3 may help the cell detach its back end from the ECM, so as to move forward and metastasize efficiently, Norman speculates.

The team examined expression of Rab25 and CLIC3 in human pancreatic tumors, and found that patients whose tumors had high Rab25 but no CLIC3 expression had the best prognosis. Tumors with high levels of both, however, had the worst outcomes. One difference between Rab25 being a tumor activator or suppressor, therefore, appears to be the presence of CLIC3.

This finding could have an impact on pancreatic cancer diagnosis, says Norman, as patients with premalignant CLIC3+ pancreatic lesions are likely to develop an aggressive tumor. “It could help to stratify patients to help choose therapeutic strategies,” says Serini.