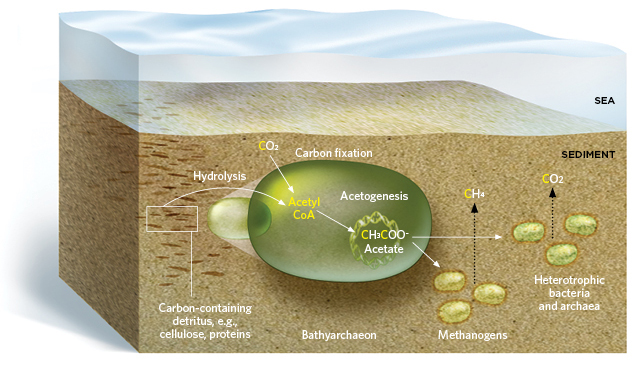 PLAYING A PART: Members of the phylum Bathyarchaeota are abundant in marine sediments, where they take up carbon from organic compounds in the surrounding environment. A recent study has shown that they also have the potential to fix inorganic carbon—in the form of carbon dioxide (CO2)—to generate acetate, an important fuel for other sediment-dwelling organisms such as methanogens (which include marine archaea) and heterotrophic bacteria. The products of these organisms feed back into the carbon cycle in marine sediments, where they may be consumed by other microbes.© THOM GRAVES

The paper
Y. He et al., “Genomic and enzymatic evidence for acetogenesis among multiple lineages of the archaeal phylum Bathyarchaeota widespread in marine sediments,” Nat Microbiol, 16035, 2016.

Microbial ecologist Fengping Wang was not looking for archaea. She just couldn’t stop finding them. A couple of years ago at Shanghai Jiao Tong...

Wang was puzzled. Archaea have traditionally been thought of as extremophiles, living unusual lifestyles in unusual environments, such as in hot springs or the Arctic. Even though that view is changing as more and more studies identify archaea in diverse habitats, the organisms’ abundance in these sedimentary samples, collected from the Gulf of California, was a surprise to Wang, and she wondered whether perhaps they were performing an as yet undiscovered ecosystem function.

Along with collaborators at Shenzhen University in China and the Woods Hole Oceanographic Institution in Massachusetts, Wang’s group in Shanghai used metagenomics to identify most of the archaea in their sediment samples as members of a phylum called Bathyarchaeota, newly established in 2013 by Wang and her colleagues and previously known as the Miscellaneous Crenarchaeotic Group. Analyzing the genomes of these archaea revealed several sequences that appeared to code for proteins involved in carbon cycling processes including, unexpectedly, acetogenesis—the production of acetate from inorganic carbon, a crucial step in biogeochemical cycling in marine carbon reservoirs.

“This was really surprising to us,” says Wang. “Acetogenesis is a very important pathway, especially in anaerobic environments, as acetate is a source of organic carbon which can be used to fuel other organisms, or for methane production. It was thought that bacteria were the major players.”

The researchers were keen to learn more about Bathyarchaeota’s role in acetogenesis, but they faced challenges studying the microbes directly in the lab because the organisms are notoriously slow-growing and difficult to cultivate. So to test whether the Bathyarchaeota gene sequences were in fact functional, the team “did a little bit of enzyme characterization,” Wang says. The researchers cloned one of the genes that appeared to be involved in acetogenesis, expressed it in E. coli, and through biochemical assays showed that the resulting enzyme could catalyze a step in the acetogenesis pathway. “We found that they can really perform acetogenesis,” says Wang, adding that now, scientists “will have to rethink the roles of archaea.”

“It’s a really very interesting study because it highlights the importance of archaea in geochemical cycles,” says microbiologist Bettina Siebers of the University of Duisberg-Essen, Germany, who was not involved in the work. “It helps us to understand what’s really going on in marine sediments.” The next step, she adds, will be to try to grow these cells in the lab to perform studies on their function.

Plans to do just that are underway in Wang’s lab, alongside the development of approaches to characterize the archaea’s carbon cycling activity in situ. “We need to prove that the acetogenesis really occurs in the environment,” Wang says, “not just in the lab or in the genome.”