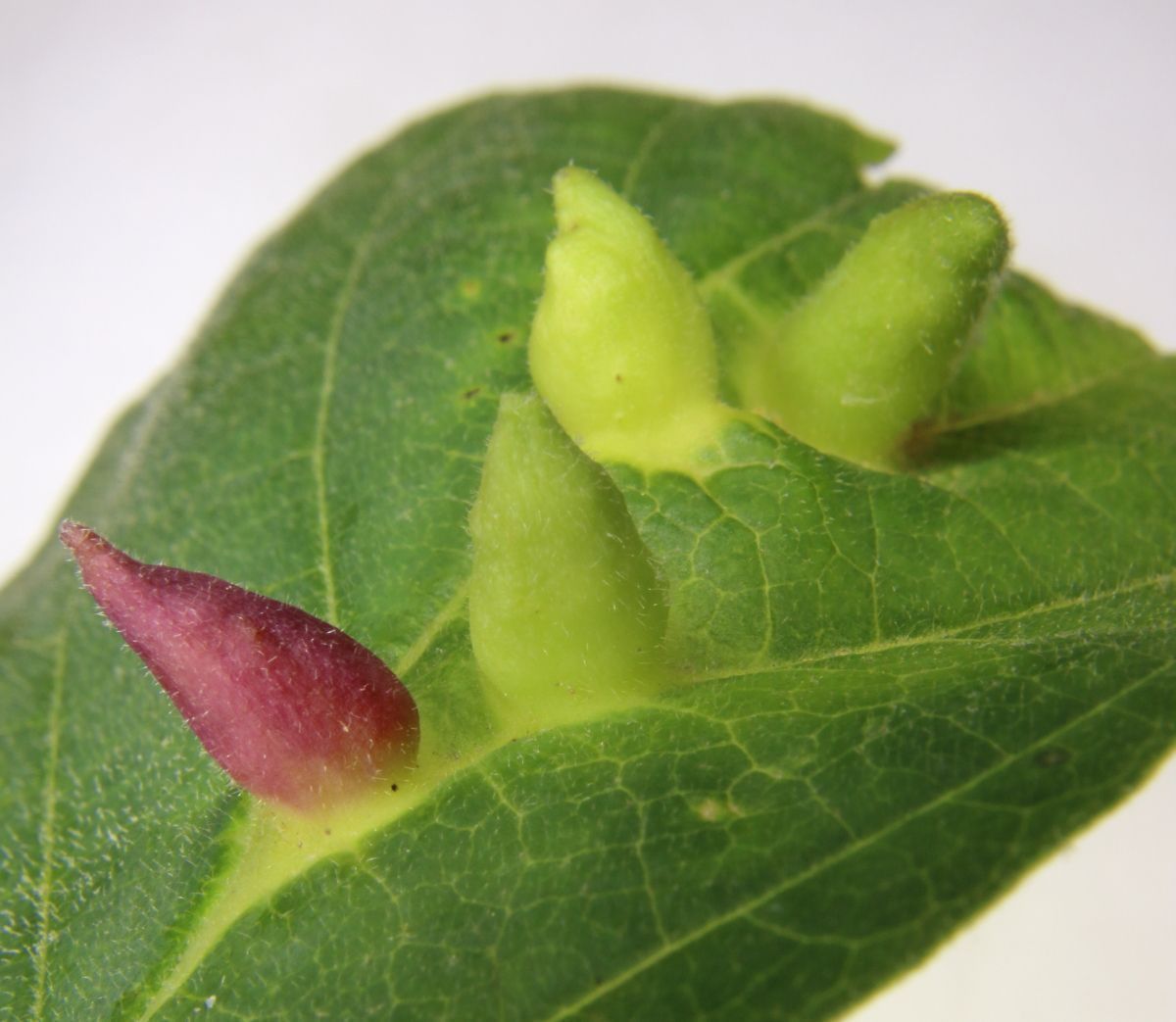 In spring, an Hormaphis cornu aphid foundress injects saliva into a witch hazel leaf, coercing the plant to grow an elongated cone-shaped growth that encloses her. Inside this structure, known as a gall, she feeds and asexually reproduces. After a few weeks, the gall opens and the mature offspring fly to river birch trees, which host several generations of aphids that don’t produce galls before the cycle begins again with a new foundress generation.

Galls come in all manner of strange shapes and colors, each unique to the insect species that creates them. Exactly how gall-producing insects reprogram plant physiology to develop these abnormal structures has mystified scientists for centuries, says David Stern, a biologist at the Howard Hughes Medical Institute’s Janelia Research Campus. Wandering the woods one days, Stern noticed that while most H. cornu galls were green, some were red. “My geneticist mind clicked into gear,” says Stern, who realized he could use this variation to investigate gall development.

Comparing gene expression in plant tissue from the two gall colors, Stern and his team found that just eight genes were downregulated in green galls relative to red galls, most of which were similar to genes involved in the biosynthesis of red pigments called anthocyanins.

The researchers also looked at gene expression in foundresses compared with non-gall-making generations. About 450 genes, which they dubbed bicycle genes, were specifically expressed in the salivary glands of foundresses. When they compared the genomes of foundresses from different colored galls, the strongest differences occurred on one of these bicycle genes, which they named determinant of gall color (dgc). Specifically, there were different versions of the gene in red-gall-making foundresses compared with their green-gall-making counterparts. Foundresses from green galls always had two copies of dgcgreen, while those from red galls had either two copies of dgcred or one of each gene variant, indicating that the red allele was dominant. The team found that dgcred silences expression of dgc: aphids with even one copy of dgcred had about 20-fold lower expression of dgc in salivary glands than aphids with two green alleles. Stern suspects that the dgc-encoded protein suppresses anthocyanin production. 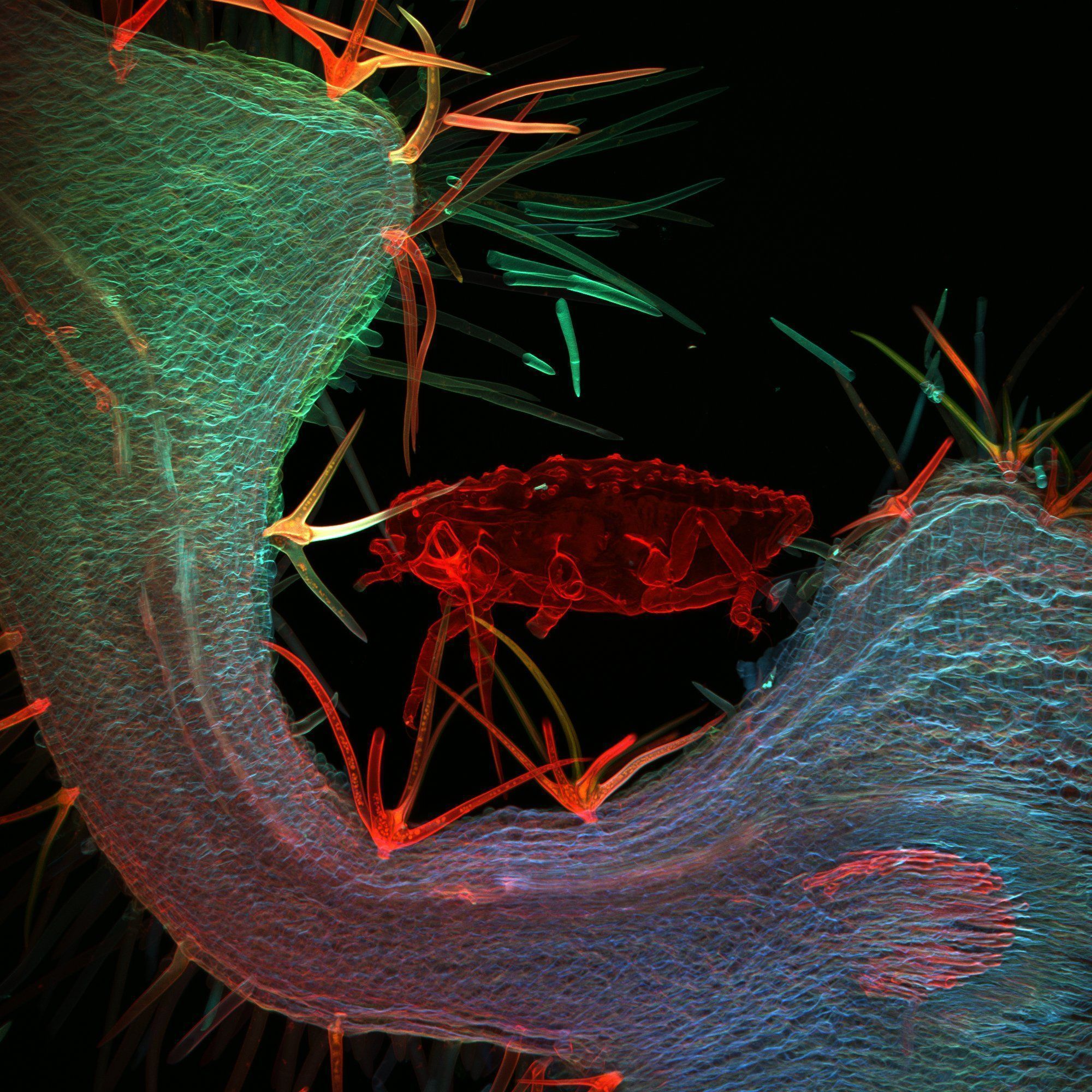 A confocal microscopy image of a gall section showing a Hormaphis cornu foundress inside. The top of the leaf is oriented downward.
IGOR SIWANOWICZ

“It’s a magnificent piece of work” says Jack Schultz, an entomologist and chemical ecologist at the University of Toledo. “I don’t know of another study which takes such a comprehensive approach.” But, he adds, “the study does not show that any of the putative signals move from the insect into the plant,” data he says would strengthen the case that dgc regulates gall production.

According to Stern, the bicycle sequences are unlike any previously described genes. He hypothesizes that the proteins they encode may regulate other aspects of gall development, and agrees the next step is probing how they do so. “What molecules in the plant cell are BICYCLE proteins binding to, and how do they change activity of the plant cell?”