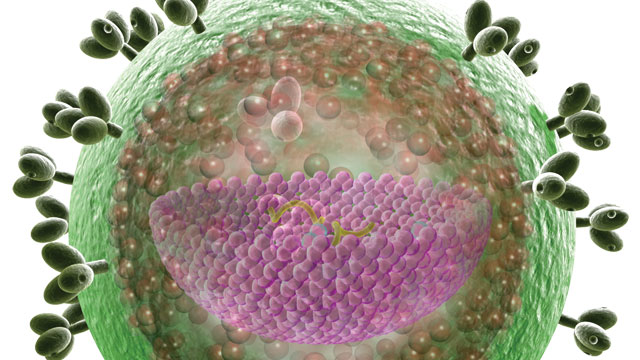 Antibodies against a critical part of the HIV gp120 protein cannot easily get to their target—the CD4 binding site.3D4MEDICAL / PHOTO RESEARCHERS, INC

The most immunogenic molecules on the surfaces of pathogens—the ones that elicit the strongest immune response—are often also the most variable. The influenza virus changes its surface proteins so rapidly that a different vaccine must be manufactured every year. However, the nonimmunogenic part of the surface proteins remains unchanged. To overcome this difficulty, researchers are employing a number of new approaches—from tinkering with the immune system to scouring viral genomes for proteins that are conserved across generations—in a quest to create so-called “universal” vaccines. With such vaccines, one jab for each pathogen will protect us from all current and future variations of each disease, and maybe even from different families of related pathogens. But why has it been difficult to create such vaccines, and what...

The variants of each species of disease-causing pathogen have made a one-size-fits-all approach difficult. For example, the meningitis-causing bacterium, Neisseria meningitidis, has a capsule—a polysaccharide outer coating—the varying composition of which defines its five serotypes. These sugars are not very immunogenic, making it difficult to coax the immune system to create antibodies against them. By conjugating the sugar molecules to a mutated diphtheria toxin protein called CRM197, which engages helper T cells to broadly activate the immune system,[1. P. Costantino et al., “Development and phase 1 clinical testing of a conjugate vaccine against meningococcus A and C,” Vaccine, 10:691-98, 1992.] our lab was able to develop and license a conjugate vaccine active against four of the five serotypes.

However, our initial attempts to make an effective vaccine against the remaining type—serogroup B, which causes approximately half of the global cases of meningococcal meningitis outside of Africa—failed for several reasons. The capsular polysaccharide of type B was found to be nonimmunogenic even when conjugated to an immunogenic protein carrier. On the other hand, serogroup B’s most abundant and immunogenic surface protein, PorA, is also one of the most variable, meaning that a vaccine built against it would become irrelevant as soon as the bacteria expressed a new version of the protein. Therefore, using a technique called reverse vaccinology, we examined the Neisseria genome for antigens that were neither too abundant nor too immunogenic, using sequence conservation as a guide. We found three antigens that were broadly shared across strains, and therefore less variable, and used them in a vaccine formulation predicted to protect against more than three-quarters of meningococcal serotype B strains.[2. M. Pizza et al., “Identification of vaccine candidates against serogroup B meningococcus by whole-genome sequencing,” Science, 287:1816-20, 2000.] The vaccine has now finished phase III clinical trials, and is being submitted to the European Medicines Agency for regulatory approval.

Recently, Ian Wilson’s lab at The Scripps Research Institute reported finding universal neutralizing antibodies against the conserved HA2 region of influenza surface protein hemagglutinin, raising the hope that researchers could create one flu vaccine that would be effective over a long period of time, rather than having to develop a new one every year.[3. D. C. Ekiert et al., “Antibody recognition of a highly conserved influenza virus epitope,” Science, 324:246-51, 2009.] To date, the antibodies generated have only been protective for one flu season. The conserved regions that could confer more lasting protection have evolved to be poorly immunogenic, although the molecular basis of that low immunogenicity is less clear.

In the case of HIV, to make a vaccine that would be protective against all the HIV variants, groups led by John Mascola and Peter Kwong at NIH’s Vaccine Research Center focused their attention on the most conserved part of the HIV envelope: the protein gp120. A protein essential for viral entry, gp120 binds to the CD4 receptor on lymphocytes. The virus cannot sustain a change in this conserved region without inhibiting access to its target host cell, and should therefore be ideal for concocting a universal vaccine. Surprisingly, neutralizing antibodies against this region can be found in a rare number of infected patients, suggesting that the immune system is indeed capable of mounting a response to this antigen.[4. X. Wu et al., “Rational design of envelope identifies broadly neutralizing human monoclonal antibodies to HIV-1,” Science, 329:856-61, 2010.],[5. T. Zhou et al., “Structural basis for broad and potent neutralization of HIV-1 by antibody VRC01,” Science, 329:811-17, 2010.] However, like many other conserved epitopes, the gp120 region that binds to CD4 is usually poorly immunogenic.

Researchers looking for the cause of gp120’s lackluster activation of the immune system crystallized the viral protein while bound to an antibody. The structure revealed that HIV hides the CD4 binding site in a region not easily accessible to antibodies. Influenza, on the other hand, makes the HA2 epitope nonimmunogenic by not providing a surface to which antibodies might bind strongly. In other words, pathogens may have evolved epitopes which do not bind to antibodies, keeping their most vulnerable molecules inaccessible to the immune system.

Opportunistic fungal pathogens such as Candida, Aspergillus, and Cryptococcus have also evaded the formulation of a “universal” vaccine. These diseases attack people with weak immune systems and cause a high degree of mortality. Vaccine development to date has mostly used cell-wall extracts to generate an immune response, but as with Neisseria, these consist mostly of poorly immunogenic sugar molecules. Recently, however, Antonio Cassone’s lab in Rome isolated a monoclonal antibody that was able to protect against Candida and Cryptococcus. The antibody recognized ß-glucan, a polysaccharide component of the cell wall that is present in all fungi, and inhibited the growth of Candida hyphae in vitro.[6. A. Torosantucci et al., “Protection by anti-beta-glucan antibodies is associated with restricted beta-1,3 glucan binding specificity and inhibition of fungal growth and adherence,”  PLoS One, 4:e5392, 2009.] My group was then able to conjugate laminarin, a polysaccharide from brown algae that contains ß-glucan, to the diphtheria toxin mutant CRM197 and make a vaccine that protected mice against infection with Candida and Aspergillus.[7. D. Pietrella et al., “A beta-glucan-conjugate vaccine and anti-beta-glucan antibodies are effective against murine vaginal candidiasis as assessed by a novel in vivo imaging technique,” Vaccine, 28:1717-25, 2010.]

Many challenges lie ahead. Vaccines against HIV and malaria, or a truly universal vaccine against influenza, are still a long way off. It is important that we keep looking for alternative technical solutions, such as designing custom antigens, guided by structural knowledge, to create immunodominant epitopes that will protect against the many natural variants of any single pathogen.