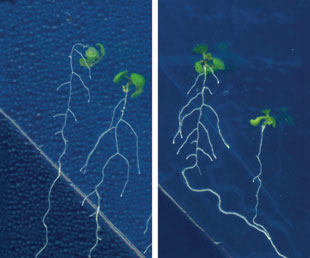 BYPASS THE SALT: The roots of Arabidopsis seedlings (controls on left) change their downward course when they encounter salinity (right). Colors have been enhanced.CARLOS GALVAN-AMPUDIA

The context
Gravity guides the course of root development in plants through a process called gravitropism. Salt may also change the architecture of plants’ root systems, but until now, it was unclear whether this response was directional—a true tropism—or an effect of salt that somehow made the roots less responsive to gravity.

The finding
A team led by Christa Testerink of the University of Amsterdam grew Arabidopsis and tomato seedlings in agar prepared with a diagonal salt gradient. The roots of the seedlings changed direction when they encountered the salinity, a response the group termed halotropism. “We...