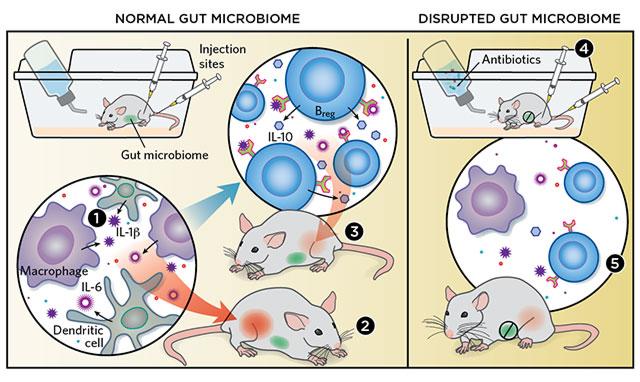 MICROBIAL INSTIGATORS: Conventionally housed mice are exposed to ample amounts of bacteria, which colonize their guts. When researchers induce arthritis in the mice by injecting them with foreign antigens, the animals’ macrophages and dendritic cells go into overdrive, producing the cytokines IL-1β and IL-6 (1). These cytokines lead to acute arthritis (2). But they also drive the development of Bregs, which produce the anti-inflammatory cytokine IL-10 that subsequently quells arthritic symptoms (3). Meanwhile, mice raised in a sterile environment or given antibiotics to knock down their gut microbiota (4) suffer less acute arthritis, due to a relative lack of IL-1β, IL-6, and other pro-inflammatory cytokines. They also produce fewer Bregs (5). © KIMBERLY BATTISTA

Elizabeth Rosser was partway through her...

It is well-known that animals’ immune systems do not always behave the same way in new, very clean housing facilities as in older ones. The literature shows that in mice with arthritis, gut microbes drive the release of inflammatory cytokines, such as interleukin-1β (IL-1β) and interleukin-6 (IL-6), by macrophages and dendritic cells. If mice are raised in a facility that is too clean, their gut microbiota can’t help spark the inflammatory response.

Rosser, now a postdoc in the same lab, found that model mice housed in sterile conditions also had a reduced number of Bregs in their spleens. Similarly, when mice housed in conventional conditions were given a cocktail of three different antibiotics, they developed less-acute arthritis than controls and their numbers of Bregs were reduced.

The researchers next intravenously transferred B cells from antibiotic-treated mice, mice housed in sterile conditions, or mice housed in conventional conditions into mice with lab-induced arthritis. The B-cell transplants from conventionally raised mice helped suppress arthritis, while the transplants from the mice with disrupted microbiota did not make a difference.

The difference in B cells derived from mice with disrupted microbiota appeared to stem from the cells’ impaired ability to release the anti-inflammatory cytokine interleukin-10 (IL-10). Bregs produce IL-10 in response to the arthritis-triggering cytokines IL-1β and IL-6. Mice with B cells lacking IL-1β and IL-6 receptors produce less IL-10 and develop more severe arthritis, the researchers found.

Claudia Mauri, Rosser’s advisor, says while Rosser’s original project seemed to hit a roadblock, “the good twist in the story is that the inflammatory signals that induce Bregs are dictated by the composition of the microbiota in the gut.”

Bregs in control mice expressed a cell-surface protein that directed the cells to gut-associated lymphoid tissues, suggesting that these cells shuttle between the spleen and the gut. In an attempt to determine which microbes lead to Breg development, the researchers sequenced microbial DNA found in the mice’s fecal matter. The antibiotic-treated mice had notably reduced microbial diversity compared to the controls; however, mice that lived in sterile conditions had only subtle differences in their microbes compared to the controls.

“The clinical manifestation was dramatically different, yet when we looked at the composition of the gut. . . .we had to look really hard to identify significant differences,” says Mauri.

“It’s a great paper but obviously opens up lots of different questions,” says Javier Ochoa-Repáraz, a microbiologist at Dartmouth College who was not involved in the study. “The idea would be to be able to identify these microbial populations that are causing these effects.”