ABOVE: GIMMIE: A pathogenic bacteria that steals Allium triquetrum’s iron may be key to controlling the invasive weed.
FLICKR, A.POULOS (IYA)

In Australia, the pathogenic bacterium Pectobacterium carotovorum decimates the invasive angled onion (Allium triquetrum, also known as the three-cornered leek or onion weed), by causing the plant to rot. One of the bacterium’s strengths is its ability to sap the plant’s iron reserves, but exactly how it does this has been a mystery. The answer could hold the key to using the bacterial species, and others like it, to control noxious weeds.

After sequencing the genome of the Australian strain of P. carotovorum, Trevor Lithgow, a microbiologist at Monash University in Melbourne, and his colleagues isolated FusC, a gene that encodes an enzyme that seems to help the bacterium steal plants’ iron using what’s known as a Brownian ratchet mechanism. Lithgow explains that proteins entering through the bacterium’s cell membrane can move in and out of certain pores thanks to Brownian motion—the random movement of particles. Based on crystallography experiments, the researchers think FusC sits just inside the membrane of the bacterium and latches onto to ferredoxin, a plant protein loaded with iron, preventing it from moving back out of the cell. Either FusC, which is similar to enzymes that interact with ferredoxin in plant plastids and mitochondria, or another enzyme then breaks down the iron-laden protein, freeing the iron for the bacterium’s use.

Plants use a similar strategy to harvest iron from their surroundings. It’s not clear whether the bacterium acquired the genes for iron piracy from the plants themselves or evolved them independently, the authors explain in their paper. Matthew Barber, a molecular biologist at the University of Oregon who was not involved in the research, says the iron-acquisition model is not completely fleshed out yet, but is worthy of more investigation. Still, he says, it’s “pretty cool” how bacteria have tapped into plants’ iron source to survive. 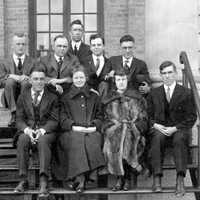