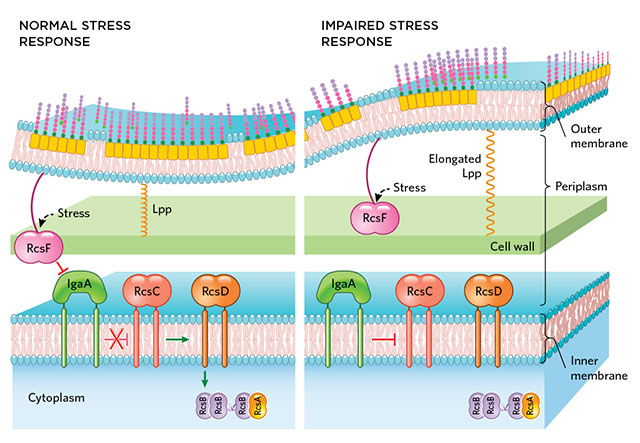 SIZE MATTERS: When a bacterium encounters a stressor, RcsF inhibits IgaA, lifting its blockage on the activity of downstream components of the Rcs network. But if the periplasmic distance widens, RcsF is unable to reach IgaA, preventing the system from initiating a stress response.© STEVE GRAEPEL

The cell envelope of a gram-negative bacterium protects it from its surroundings and aids survival in another key way: relaying stress signals. “A bacterium like E. coli has several systems that are used to sense stress in the cell envelope,” says Jean-François Collet, a microbiologist at the de Duve Institute in Belgium. One of these, the regulator of capsule synthesis (Rcs) system, depends on the width of the periplasm—the space between the envelope’s inner...

The Rcs system senses damage to the cell envelope and responds by modifying the expression of genes involved in functions such as motility and biofilm formation. The system consists of multiple molecular components that work together to activate the stress response, including the stress-sensing outer membrane lipoprotein RcsF and the inner membrane protein IgaA.

Collet’s team previously found that under normal conditions, RcsF is exported to the cell surface. However, when the organism encounters a stressor, such as a chemical that damages the envelope, the protein remains inside the periplasm, allowing it to interact with and activate the inner-membrane components of the stress-response pathway. The Rcs system and several other important protein complexes span the periplasm, so Collet and his colleagues asked: “What happens if we increase [that] distance?”

To investigate this question, his team increased the length of Braun’s lipoprotein (Lpp), which anchors the outer membrane to the cell wall, the layer lying within the periplasm. They discovered that when the periplasmic space was increased, the Rcs pathway did not respond to stressors such as A22 and mecillinam, drugs that target complexes involved in cell wall genesis. To see whether this was truly due to the larger gap, the team increased the length of RcsF to correspond with the longer Lpp and found that the stress response was restored. The experiment “seemed so simple . . . [that] we didn’t think that it would work,” Collet says. “But it worked beautifully.”

These findings suggest that the width of the periplasmic space dictates the optimal size for the Rcs system to work, says Anna Konovalova, a microbiologist at the University of Texas Health Science Center in Houston who was not involved in the work. However, she adds, there are multiple ways to induce the Rcs stress response, and it’s important to investigate whether this holds true with other stressors, such as polymyxin B, an antibiotic that targets the outer membrane.

The paper’s authors suggest that their findings could pave the way for new antibiotics that weaken bacteria by altering the width of the periplasmic space. “They’ve identified one system—and we may now identify other systems that require, or at least rely on, signaling  based on the length of the periplasmic space,” says Nicholas Noinaj, a Purdue University structural biologist who was not involved in this work. “But whether that’s something that we can target or not remains to be determined.”