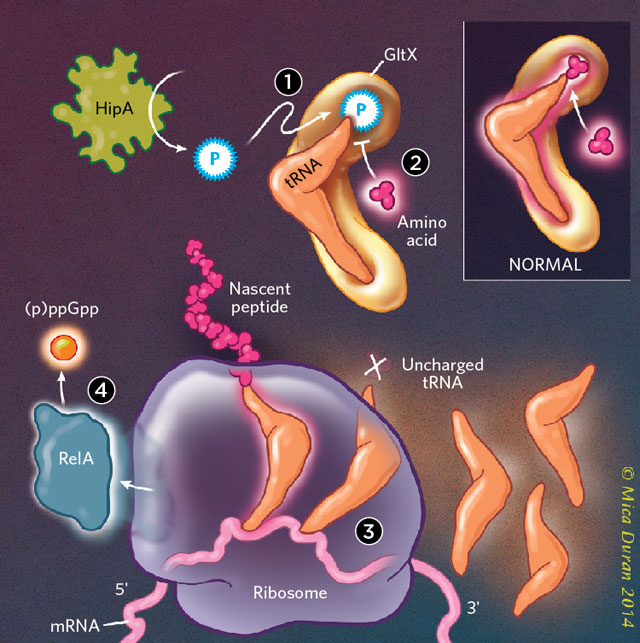 PERSISTER PATHWAY: Phosphorylation of GltX by the bacterial toxin HipA (1) blocks GltX from adding an amino acid to transfer RNA (tRNA) (2). Uncharged tRNAs clog up the protein synthesis machinery (3), which leads to the production of the alarmone guanosine pentaphosphate [(p)ppGpp], synthesized by RelA, (4) and the subsequent shut down of cellular activities.

In any given colony of, say, one million bacterial cells, there are bound to be one or two individuals that will survive an onslaught of antibiotics. The phenomenon, first identified in the 1940s, is called bacterial persistence or multidrug tolerance. Unlike antibiotic resistance, which results from a genetic alteration that renders a bacterium invulnerable to particular drugs, persistence derives from a sort of cellular sleep. Normal cellular functions shut down, giving antibiotics—which...

Bacteria capable of persistence have dueling protein pairs—a toxin and an antitoxin. The toxin forces the cell into a dormant state, and the antitoxin reverses the inhibition and revives the cell. HipA was the first toxin gene identified in E. coli, and its induction can halt replication, transcription, and translation. A few years ago, Richard Brennan, now at Duke University, and his colleagues published evidence that HipA acts by phosphorylating the translation factor EF-Tu, thereby stopping its activity and halting protein synthesis. “But this was not very consistent with some observations” from other studies of HipA’s effects on transcription and replication, says Nikolay Zenkin, a molecular biologist at Newcastle University, “and we started to dig deeper.”

Zenkin and his colleagues screened bacteria that overexpressed various genes to find those genes that would counter the effects of HipA. One gene—gltx—was up to the task. Cells overexpressing gltx continued to thrive, despite the presence of HipA. “Then everything made sense straightaway,” says Zenkin. It turns out that the gene’s product, a protein called glutamyl-tRNA synthetase (GltX), is important for protein synthesis.

GltX facilitates protein translation by adding an amino acid to transfer RNA (tRNA). Zenkin’s team went on to show that overproduction of HipA in vivo leads to phosphorylation of GltX, and in vitro this phosphorylation by HipA blocks GltX from adding the amino acid glutamic acid to the tRNA. As a result, protein synthesis grinds to a halt. “I can believe that [GltX] is a target, but I’m not convinced it’s the only target yet,” says Brennan, who was not involved with Zenkin’s work.

Like EF-Tu, GltX is involved in translation, but Zenkin’s team proposes a mechanism by which this pathway also locks down transcription and replication: when GltX is phosphorylated by HipA, uncharged tRNAs clog up the ribosome where they would ordinarily deliver amino acids during the construction of a protein. The tRNA traffic jam then stimulates the production of guanosine pentaphosphate, also known as (p)ppGpp, a so-called alarmone. “This triggers this big cascade of events that leads to shutting down of all essential processes in the cell, like replication, transcription, and as a result leads to dormancy,” says Zenkin. To test their claim, the researchers deleted proteins involved in the synthesis of the alarmone and found that bacterial persistence dropped considerably.

While the findings help explain how persister bacteria come about, they don’t point to a clear target to make antibiotics more effective. “The problem here is E. coli has 12 toxins, some will say more,” says Zenkin. “You could imagine you would have to inactivate all of them.”