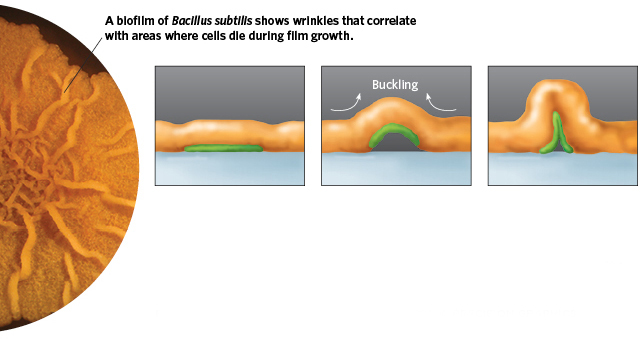 WRINKLES IN TIME: Researchers grew a colony of bacteria with Sytox Green, a fluorescent marker that lit up when cells died. As the colony grew, its extracellular matrix restricted the movement of cells, until those cells on the underside of the film began to die. The areas with dead cells (green) experience a release of mechanical pressure imposed by the extracellular matrix, allowing the film to buckle and form the wrinkled surface seen in some bacterial colonies.BIOFILM COURTESY OF SUEL LAB;
ILLUSTRATION © PRECISION GRAPHICS

Bacteria can form multicellular biofilms, which are glued together by an extracellular matrix. Wrinkles in the film—large enough to see with the naked eye—help to provide protection from penetration by water and gases and appear to help the...

Süel’s group tracked the death of Bacillus subtilis cells during the growth of a biofilm using a cell death reporter called Sytox Green. “There’s really a pattern of cell death that you see,” says Süel. In cross sections of the biofilm, the researchers observed that cell death occurred at the base of the humps and dead cells became folded inside the bottoms of wrinkles. Using time-lapse microscopy, they found that cells began to die off before the formation of the folds, suggesting that the pattern of bacterial death might drive wrinkle formation.

Süel’s group then seeded the starting bacterial culture with fluorescent beads that get pushed in the direction of cell migration—like plankton floating in a current—enabling the team to track the movements of cells as the biofilm developed. The beads’ trajectories indicated that cells migrated to the point where the biofilm would buckle to form a wrinkle, and that these sites of convergence overlapped with areas of cell death. Because cell death occurs before cells begin to congregate upon that spot, Süel and his colleagues concluded that the elimination of these bacteria bolsters wrinkling.

As Süel explains it, the extracellular matrix restricts the movements of cells as the biofilm grows, resulting in a cellular squeeze. “There’s no release for the mechanical pressure. Ultimately, you have these local areas of death, and when they happen, they provide an outlet for those forces,” he says. One puzzling aspect of the process, Süel says, is how cells communicate where the regions of death are to occur.

Bayles says the findings should encourage scientists to think of bacteria not as independent, single-celled organisms, but as part of multicellular units. “When you start thinking about it that way,” he says, “it sort of makes sense that there’s a subpopulation that’s sacrificed for the whole of the organism.”