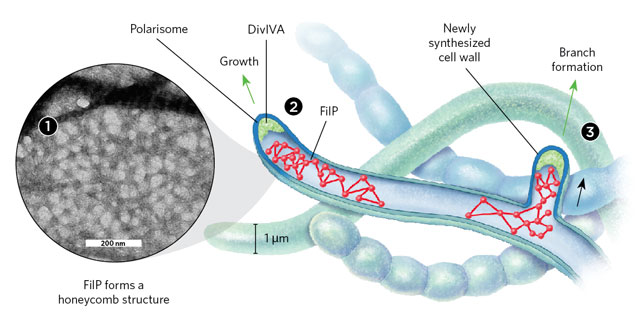 STRESS BEARING: The intermediate filament-like protein FilP spontaneously assembles into a honeycomb-like network in vitro (1), which explains how it supports newly synthesized sections of cell wall in bacteria that grow by extending from the tip and initiating new branches. In Streptomyces coelicolor, FilP (red) accumulates most densely behind the zone occupied by DivIVA proteins (green), the major component of the polarisome, which orchestrates polar growth (2). The same pattern is observed in new branches (3). The findings suggest that DivIVA recruits FilP to the hypha tip to provide a stress-bearing structure where the nascent cell wall is vulnerable. © LAURIE O'KEEFE

The paper
K. Fuchino et al., “Dynamic gradients of an intermediate filament-like cytoskeleton are recruited by a polarity landmark during apical growth,” PNAS, 110:1889-97, 2013.

Although most bacteria proliferate by dividing across the middle, some species grow by extending from the...

In 2008, Nora Ausmees of Lund University in Sweden and colleagues showed that a filamentous protein called FilP appears to have a stress-bearing function in the hyphae of Streptomyces coelicolor. FilP is similar to the intermediate filament (IF) proteins in eukaryotic cells, so called because their average diameter lies between that of actin and tubulin-based filaments. Now, Ausmees and her team have taken a closer look at how FilP performs its supporting role.

The researchers purified the protein in a solution designed to mimic the cytoplasm, and found that FilP spontaneously forms a cross-linked network of filaments with a hexagonal structure resembling honeycomb, which explains how FilP provides mechanical support to the tip, says Ausmees.

The team also observed that FilP filaments were most concentrated near the tips of the Streptomyces hyphae—the site of a protein complex, known as the polarisome, that drives polar growth. As soon as the bacteria stopped growing, this polar FilP gradient disappeared. Interestingly, FilP accumulated most densely immediately behind the area occupied by DivIVA proteins, the main component of the polarisome, suggesting that DivIVA somehow attracted FilP to the tip during polar growth. In situ proximity ligation assays confirmed that FilP and DivIVA molecules are sufficiently close together in this area to directly interact.

The results prompted Ausmees to propose that DivIVA controls the recruitment of FilP to deliver support at the growing tip, where the nascent cell wall is matured. “We’ve shown that formation of an IF-like cytoskeleton is directly coupled to the process of tip extension, making sure that an additional stress-bearing structure is built up at the most vulnerable cellular site,” Ausmees says. This may be a common strategy shared by evolutionarily distant tip-growing organisms, from mycelial bacteria to filamentous fungi to pollen tubes, she adds.

“Until very recently we knew almost nothing about the proteins which organize polar growth in Streptomyces,” says Mark Buttner of the John Innes Centre in Norwich, U.K. who was not involved in the study. “But in the last six to nine months there has been a rash of papers, including this one, showing how cytoskeletal proteins are responsible for organizing cell-wall synthesis and polar growth.”

Moreover, FilP networks might be a useful model for studying IFs in human cells, which could shed light on certain diseases, including progeria syndrome and some forms of dysplasia and muscular dystrophy, that occur when defects in IF proteins cause a loss of mechanical resilience in nuclear envelopes. “We might even try to apply our method [of inducing filament network formation in vitro] to study human IFs directly,” says Ausmees.