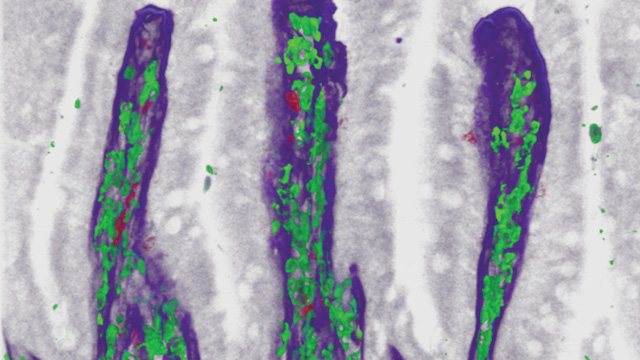 CROSSTALK: IgA producing B cells (green) appear in large numbers in the villi (purple) of the small intestine, where they help keep microbiota from suppressing metabolic functions of the epithelium (gray). AMIRAN DZUTSEV & NATALIA SHULZHENKO

N. Shulzhenko et al., "Crosstalk between B lymphocytes, microbiota and the intestinal epithelium governs immunity versus metabolism in the gut," Nat Med, 17:1585-93, 2011.

Researchers show that three-way talk between the immune system, commensal bacteria and a third component, the intestinal epithelial cells is essential for normal gut function. Husband-and-wife first authors Natalia Shulzhenko and Andrey Morgun, working at the National Institute of Allergy and Infectious Diseases, found that when immune cells are absent or impaired, gut epithelial cells adopt a defensive stance toward the resident microbiota, at the expense of the epithelium's normal fat-absorbing functions.

One of the most important immune cells in the gut is...

Normally, IgA crosses into the gut and controls or regulates the microbial population, says Shulzhenko. In the absence of B cells, the microbiota probably encroach into the gut's cellular lining, instigating a protective response. When the gut cells adopt this protective role, their metabolic and fat-absorbing functions are diminished.

This scenario may explain why immunocompromised "HIV patients and persons persistently challenged with multiple infections such as children in developing countries are prone to malnutrition/metabolic problems," says Andrew Gewirtz from Georgia State University.