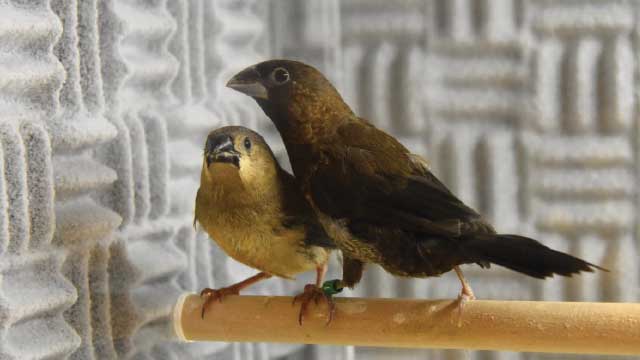 VOCAL COACH: A zebra finch (left) learned to sing from its foster parent, a Bengalese finch (right). OKINAWA INSTITUTE OF SCIENCE AND TECHNOLOGY

Vocal signatures
Bird songs contain scads of information, including a bird’s species identity and reproductive potential. According to Yoko Yazaki-Sugiyama of the Okinawa Institute of Science and Technology, there are two competing elements within an individual bird’s song: the characteristics common to all members of their species, and distinct elements that each male bird develops.

Foster parents
How zebra finches retain species identity within their unique songs was not clear, so to find out, Yazaki-Sugiyama and her team placed baby zebra finches with Bengalese finch parents. Although the young zebra finches adopted the syllables of their foster parents’ songs, their tunes maintained their own species-specific rhythm, the researchers found, coded as silent gaps between sounds. Yet the birds had never heard their conspecifics sing.

Neural barcodes
To uncover the neural origins of this innate “accent,” the team recorded neurons from the auditory cortices of birds listening to birdsongs from both their own and other species and found two different populations of neurons—one activated during the learned syllables and the other during the silent gaps. “Having the two independent systems is a big benefit for overcoming two competing criteria,” says Yazaki-Sugiyama.

Nature and nurture
“This discovery is nice because it shows that the temporal pattern is innate and the aspects that are linked to the morphology of syllables can be influenced by the social environment,” says Sébastien Derégnaucourt of University Paris West in France who was not involved in the study. From an evolutionary perspective, Derégnaucourt adds, while species-specific sounds may help birds find mates, learned behavior may help them develop differences between populations that eventually lead to new species. 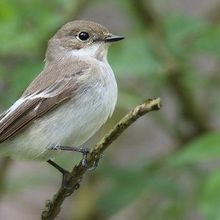 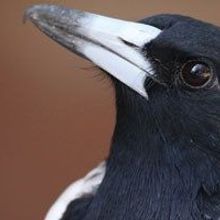 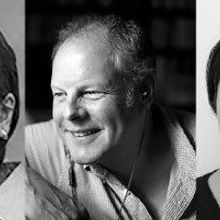